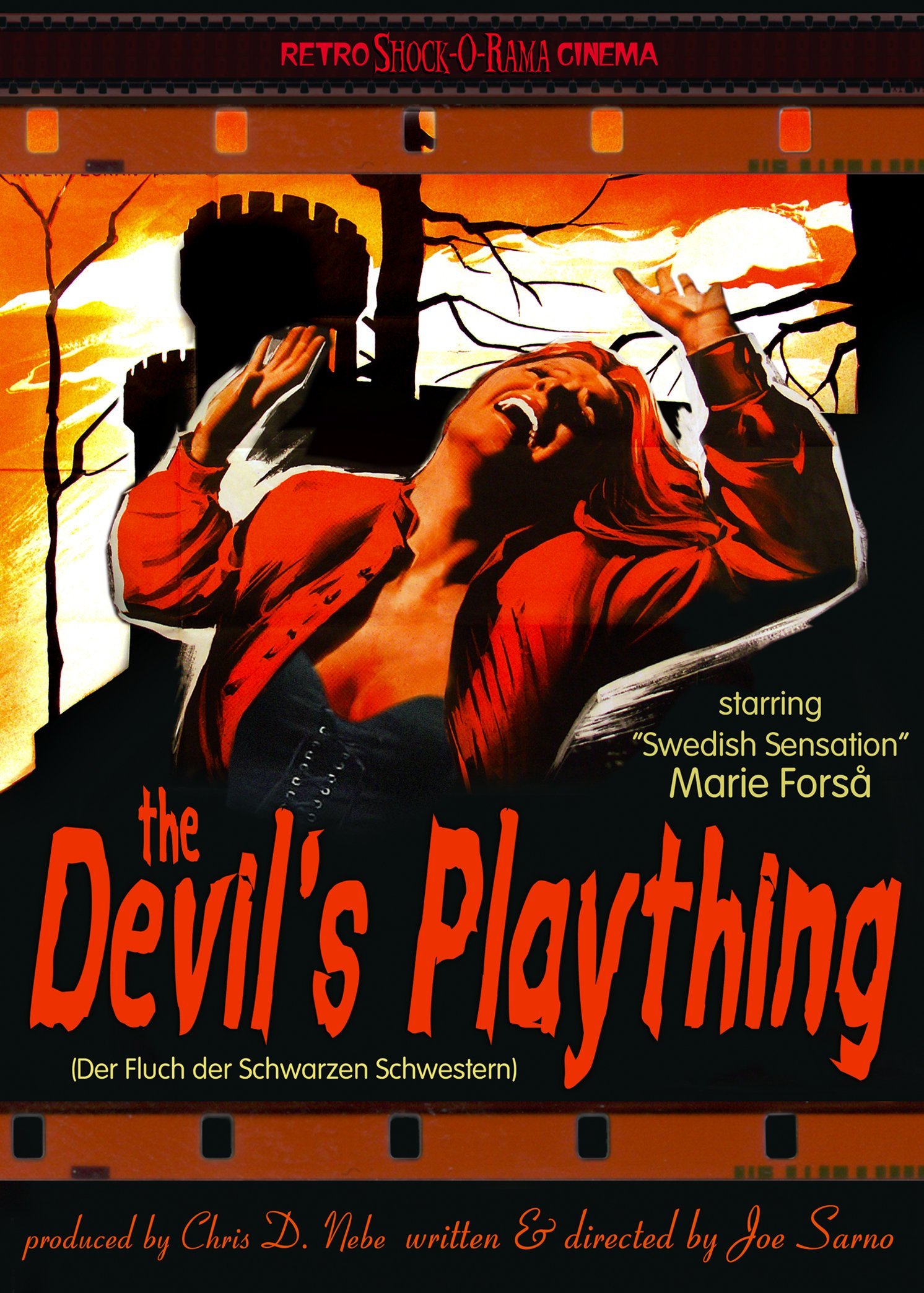 With Deep Throat having fully demolished cinema’s hardcore sex barrier just one year earlier, sleazy maestro Joseph W. Sarno (Inga, Swedish Wildcats) attempted to keep the softcore sexploitation flame alive with 1973’s The Devil’s Plaything (also known as Veil of Blood and Vampire Ecstasy), a lesbian vampire film primarily notable for being shot in English rather than Swedish or German (thereby making it more attractive to the U.S. market) and introducing blond Swedish sexpot Marie Forså to the nudie flick world. Intent on finding a living vessel for the spirit of their 400-year-old vampire baroness, a coven of buxom bloodsuckers lure to their ancient castle (in actuality, a 12th-century Munich abode owned by the uncle of schlock producer Chris D. Nebe) four bisexually-inclined babes—including Forså’s blank-faced Helga, who seems incapable of uttering more than two sentences in succession—for orgiastic copulation. With some spells that “make you tremble with chills of fever” and others designed to “set your nipples on fire,” these vampire vixens employ uncomfortably prolonged gazes and grammatically awkward language to seduce their victims, a process made easier by the perverted proclivities of everyone involved (including Anke Syring’s garlic cross-wearing doctor Julia, who can barely control her incestuous desires for her brother). Clearly indebted to Hammer Films’s Carmilla trilogy in terms of both its fixation with female-on-female neck biters and sensual gothic trappings, The Devil’s Plaything exhibits a disinterest in horror and an inability to muster eroticism, the latter of which becomes more painfully apparent with every line like a crotch-rubbing Helga’s hilariously monotone plea to her supernatural tormentors, “Oh please, make it stop. Make this throbbing stop.” Sarno has a decent visual eye even though Steve Silverman’s cinematography, especially during oft-repeated images of topless femmes writhing in a dungeon around a fiery cauldron, lacks the tawdry, pulsating color palette that might have amplified the atmosphere’s carnality. And if the film’s unsexy aesthetic chintziness—epitomized by a goofy scene in which an off-screen bat attacks an arm-waving Julia—is ultimately an insurmountable shortcoming, at least Nadia Henkowa supplies some debauched campiness as a perverted vampyr lesbian priestess with the hip-shaking moves to scare the bejesus out of any heterosexual man.

Since Sarno’s film exudes cheapness, it’s probably fitting that this DVD’s 1.78:1 anamorphic widescreen transfer is a cruddy mess, with unbalanced colors, poor shadow delineation, and an unremitting barrage of scratches, dirt, and debris. The same holds true for the mono soundtrack, which exhibits poor fidelity and noticeable pops and hisses. Still, to be fair, no amount of audio restoration would improve the cast’s semi-incomprehensible German accent-tinged dialogue.

The biggest exclusion from Slant’s review copy of The Devil’s Plaything is SEX. Instead of the unrated cut, all we received was a butchered R-rated edition that lacks the very explicit material one might watch such a film for. That said, the meager extras on both DVD versions are identical. A six-and-a-half minute May 2005 interview with Joe Sarno finds the director talking about the project’s origins, the mansion where the movie was made, how to shoot a sex scene, the inherent sensuality of vampirism, and producer Nebe’s (largely ignored) demands for more horrific scares. Comments regarding The Devil’s Plaything’s “good story” and “very good acting,” however, prove that Sarno has no idea what a competent movie looks like. Other than the director’s discussion about his “psychological” film, all that’s offered is a collection of other “Retro Shock-O-Rama Cinema” trailers.

Neither scary nor sexy, The Devil’s Plaything at least affords ample opportunities to compare the differences between natural boobs and a set of early-generation silicon implants.

Nick Schager is the entertainment critic for The Daily Beast. His work has also appeared in Variety, Esquire, The Village Voice, and other publications.