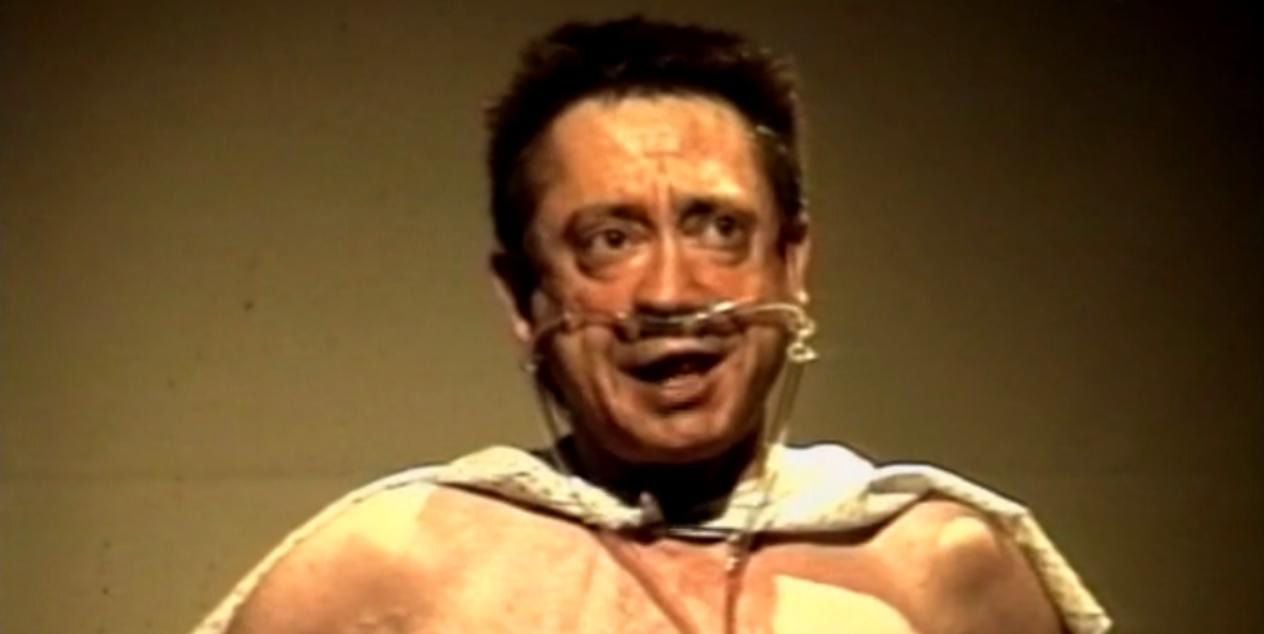 The title alone of Kirby Dick’s alleged documentary Sick: The Life and Death of Bob Flanagan, Supermasochist practically screams: “This is not your standard biopic!” And the first scene, in which Flanagan reads his own obituary, is all the confirmation we need. Dick’s film is an unquestionably straightforward and unflinching depiction of Bob Flanagan’s painful and prolonged death from Cystic Fibrosis and the director manages to bend some of the affectations of “documentary etiquette” most other filmmakers place on themselves, without ever traversing into essay film territory. Flanagan is portrayed in the film as a mordantly hilarious man who has turned his entire life into a realization of his fictional fantasies. He has made his own body the canvas for his gruesome art displays. Simple enough, but Dick is savvy enough to realize that a scrawny little dude committing various atrocities to his body isn’t profound in and of itself and is liable to send audiences running for cover. (Though thanks to a notorious scene involving a hammer, a nail, and Bob’s knobby cock, many exited before the final reel anyway.) Instead, what makes Sick more than just a provocation is how Dick conveys how often people attempt to understand those around them in terms of themselves. Though no one, not even Bob, can offer a conclusive explanation for the appeal of sadomasochism, everyone has their own theory (that more often than not speaks to his or her own various life outlooks). Bob suggests that engaging in S&M actually makes him a stronger person, and more resistant to the debilitating effects of his disease (a theory made more plausible when one takes into account that Bob lived a couple decades longer than most CF patients do). His mother, who has already buried two children to CF, seems fairly certain that Bob uses his whips n’ chains to punish the body that has betrayed him. Between the two extremes is Bob’s life/artistic partner Sheree, who knows that it’s mostly a kinky turn on; but, of course, she could just be saying that because he’s her butt-plug bitch.

A video production during the earlier stages of digital video, Sick has been transferred well, but in such a manner that doesn’t necessarily honor the original cinematography. Pixelated, blotchy, flat, colorless. It probably looks better than it did in the theater, though. The sound is a touch better, but not thrilling. In a few scenes, Bob has to be subtitled, because the camera mic couldn’t pick up what he was saying, which should say plenty about the sound quality. On the other hand, the score sounds nice.

Those expecting the deleted scenes to be filled with the stuff that was just too shocking to make the final cut will likely be disappointed, but those who simply want more first-person monologue from the compelling Bob will be overjoyed with the treasure trove of bonus clips. In addition to the deleted scenes are four clips of live performance art by Bob, as well as 20-some-odd audio bits. For those who are more interested in the film itself, the real centerpiece will be the audio commentary with director Dick and editor Dody Dorn (who’s since netted an Oscar nomination for her cutting of Memento). The film itself is strange enough, but Dick and Dorn’s odd reflections are, if anything, even more disturbing. Suffice it to say that Dorn’s notion that Bob’s nailed, bleeding penis represents a feminist attempt at equanimity with female menstruation is merely one of the chat-track highlights. Also included are two featurettes. One is a collection of interview clips with Dick, and the other is an update on the “Make a Wish” girl with CF who visits Bob during the course of the film, and who still looks quite good after seven years. Trailers and a DVD-ROM game round out the package.