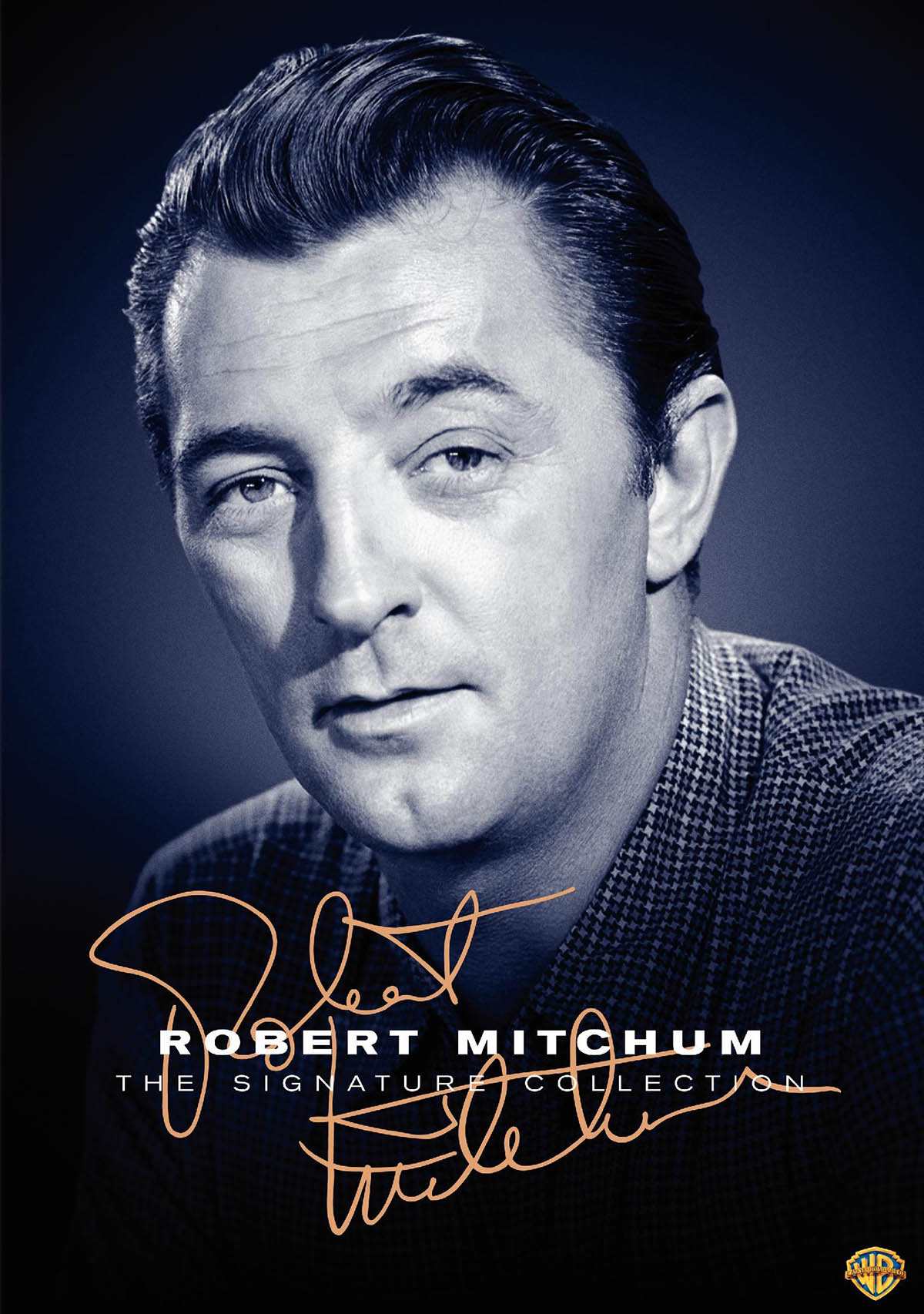 Robert Mitchum is the greatest Hollywood actor to ever pretend not to give a shit about acting. Indolence rested so voluptuously in his eyes that it could easily be mistaken for indifference, the knowing inertia of a hipster who somehow was left out of the Rat Pack. (His casting opposite Dean Martin in Henry Hathaway’s 5 Card Stud was surely an in-joke.)

Indeed, Mitchum himself professed to have stopped taking Hollywood seriously as early as 1947, when it took his Desire Me co-star Greer Garson 125 takes to get a satisfactory enunciation of the word “no.” Yet the actor soldiered on for five more decades, taking role after role with little fuss and an utter refusal to take himself or his trade seriously. Acting, after all, was just one more facet in a rumpled life that had included open-road vagrancy, temporary blindness, and a chain-gang stint by the time of his first film roles. Even in old age, he insisted on this image of his career as no thang: “I have two acting styles: with and without a horse.”

Like Humphrey Bogart or John Wayne, Mitchum gave the impression of having wandered almost by chance onto the screen, and of marveling at how hard other actors labored for their effects. In the original Cape Fear, Gregory Peck scrambles through an arsenal of outraged-family-man bits while Mitchum, playing the laidback monster taking his time with his revenge, sits back on his haunches and takes over the picture by calmly and amusedly counting the horrors his character will do to his lawyer’s wife and daughter.

A big guy, blithely handsome—the vastness of his chest, the sexy croak of his baritone—he was movie-star material all the way, though with a palpable sense of rebellion, including time in jail for smoking pot, that lent him a modern edge missing from his more housebroken colleagues. The word “cool” seems to have been invented for Mitchum, who inhabited, termite-style (to use Manny Farber’s term), countless paycheck roles but also unforgettable ones such as the prematurely life-fatigued lieutenant in The Story of G.I. Joe, the doomed fatalist in Out of the Past, and the delirious phony preacher in The Night of the Hunter.

My favorite Mitchum performance is in Nicholas Ray’s 1952 film The Lusty Men, where, as a rodeo star named Jeff McCloud who achingly searches for stability after years of hell-raising, the actor beautifully reveals hints of the loneliness that may come with a hepcat freedom which, given Ray’s gift for burrowing into his performers, could be his own. Coincidentally, Ray was assigned to re-shoot a few scenes that same year in another Mitchum film, Macao, after director Josef von Sternberg turned it over to producer Howard Hughes.

Macao is a troubled project, one of the fragments of von Sternberg’s post-Dietrich career which, upon closer inspection, displays handfuls of the director’s obsessive motifs shoved into the crevasses of a potboiler. As Nick Cochran, an adventurer adrift amid underworld wackos in the eponymous port, Mitchum pairs up with Jane Russell, his inimitable female equivalent, for the usual Yanks-in-exotic-ground jazz. What looks like a routine assignment is really a return to the Shanghai Gesture of ridiculous-sublime souls at the mercy of the roulette of fate, with the director, himself lost in Hughes’s stable, turning dross into personal grace notes.

Limber and humorous as it is, Mitchum’s performance in Macao is indistinguishable from the one he gave in John Farrow’s His Kind of Woman, his previous teaming with Russell. In Otto Preminger’s Angel Face, though, he has a far more interesting role. His deadpan is here used to match the unnerving blankness of Jean Simmons, both playing characters whose inertia is gradually revealed as signs of moral turmoil by the director’s investigative camera. Mitchum is an ambulance driver, Frank Jessup, who becomes involved with Simmons’s Beverly Hills brat, Diane Tremayne, who loves her millionaire father (Herbert Marshall) and hates her stepmother (Barbara O’Neil). He’s hired as the family chauffeur and promptly caught in the aloof young woman’s eventually murderous Freudian machinations.

Angel Face is often categorized as a noir, but even as it shares many of the themes from Preminger’s earlier Fox pictures (like Where the Sidewalk Ends and Whirlpool), it’s a less deterministic, more poetically searching study of subtly deforming alienation, where murder and love meld with equal opaqueness in the face of a troubled woman. In its charting of gray zones, the film makes for a severe companion piece to Preminger’s Bonjour Tristesse: One ends with a crash, another with a mirror, and both with devastating glimpses into the void.

The Sundowners and Home from the Hill, both from 1960, find the middle-aged actor in patriarchal roles, but otherwise they couldn’t be more different. His character in The Sundowners, an itinerant sheep drover traveling the Australian outback with his wife (Deborah Kerr) and son (Michael Anderson Jr.), has echoes of the roaming/settling tension of The Lusty Men’s melancholic cowboy, even if more conventionally laid out. Here the wife wants the family grounded, a notion at odds with the father’s wandering spirit. In the rare role that displays his warmth, Mitchum shows a generosity of spirit which floods the screen, a touch that gooses both Kerr (as down-to-earth and sensual as she usually is distant and actressy) and director Fred Zinnemann, who injects his antiseptic tastefulness with an uncharacteristic robustness which appreciates both individuality and family togetherness.

Family figures prominently in Home from the Hill, but the bonds which nurture can also suffocate in Vincente Minnelli’s Texas-set, soap-operatic epic. Regally macho in his hunter’s den, Mitchum’s powerful landowner, Captain Wade Hunnicutt, lords over the city and over his two sons, Rafe (George Peppard) and Theron (George Hamilton); the manly grasp that makes Mitchum a womanizing legend is here a stifling influence on the sensitive Theron, whose problematic path to personal freedom (in bursts of increasing violence) becomes the center of the story. An essay in lush Cinemascope textures, Home from the Hill is also as trenchantly and explicitly a queer work as Minnelli’s underrated Tea and Sympathy.

As he grew older, Mitchum’s aura of imperturbability seemed to crystallize even as it gave way to cracks of anxiety, a quality arrestingly captured in Peter Yates’s 1973 film The Friends of Eddie Coyle. Sadly, the bulk of his late career was full of such goofs as 1969’s The Good Guys and the Bad Guys, a lackadaisical Burt Kennedy western-comedy—an unofficial spoof of Sam Peckinpah’s Ride the High Country, possibly—that, while not as feeble as Kennedy’s Young Billy Young, asks very little from the actor besides showing his riding and shooting skills. It’s a prime example of his “with a horse” coasting technique.

Sydney Pollack’s 1974 The Yakuza is a much superior vehicle for the aged actor’s laconic (and iconic) distillation, even if Paul Schrader and Robert Towne’s screenplay—which catapults Mitchum into the violent netherworld of Japanese yakuza gangs—serves the braided themes of brutality and loyalty in splashes that seem timid even before the transgressive genre examinations of Fukasaku Kinji, Kitano Takeshi, or Miike Takashi. Mitchum and Takakura Ken forge a moving sense of mutual admiration for each other’s honor codes and life-worn experience, yet I would readily trade all of it for the very last shot of Mitchum at the end Howard Hawks’s El Dorado, a funny and loving reminder of the grace and humor that till the end enriched Mitchum’s deathless cool.

A pretty solid job across the board. The nicely preserved blacks and whites of Macao and Angel Face retain their director’s visual flourishes, while The Sundowners and Home from the Hill gain from cleaned-up, anamorphic widescreen presentations; colors in both The Good Guys and the Bad Guys and The Yakuza are a little on the dim side. The mono sound could be more expansive, but it’s clear throughout.

Film historian Eddie Muller is good company on commentaries, and he gives consistently enjoyable tours of Angel Face and Macao (in the latter joined by spry screenwriter Stanley Rubin and, sporadically but rewardingly, star Jane Russell). Sydney Pollack’s The Yakuza commentary is more sedate, but it’s still filled with anecdotes about the shoot and working with Mitchum. Vintage featurettes abound, but my favorite is the “Private Screenings” segment from Turner Classic Movies in the mid-’90s with Mitchum and Russell remembering their films together. Trailers round out the package.