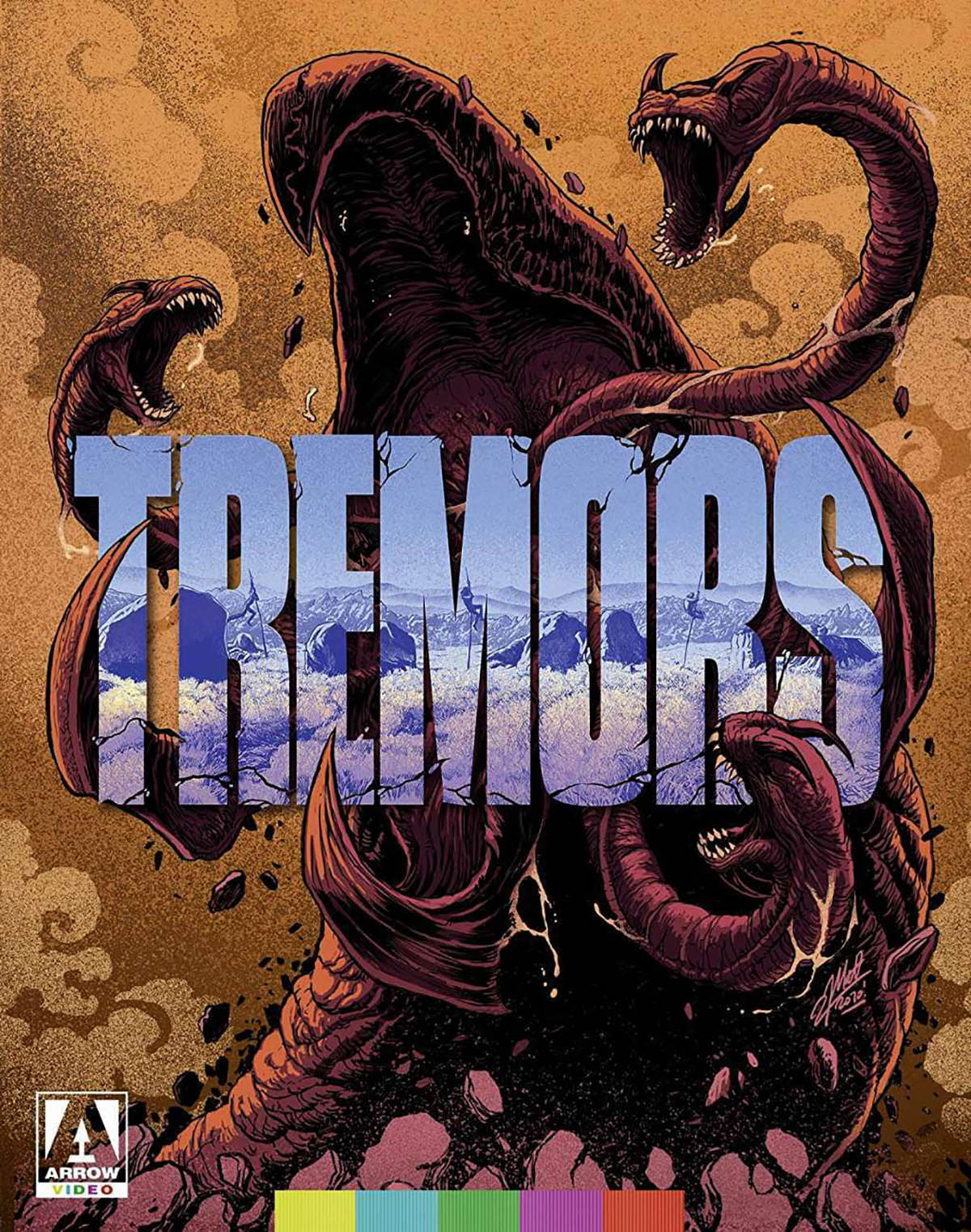 Ostensibly a “giant critter” movie like they used to make back in the 1950s, Tremors is in fact a genre hybrid of the sort that got made with some frequency during the ‘80s, toeing the line between off-kilter comedy and icky creature-feature horror with complete aplomb. Tremors thus aligns itself with films like John Landis’s pioneering An American Werewolf in London and Chuck Russell’s stellar remake of The Blob. But where those films tend to delve into some very dark terrain, Ron Underwood’s film has an amiable, eager-to-please sort of vibe about it, which largely explains its PG-13 rating.

Much of the film’s earnest shaggy-dog quality has to do with the setting, the tiny town of Perfection, Nevada, and its handful of plucky denizens. Situated smack in the middle of nowhere, Perfection epitomizes the last vestiges of the frontier spirit, and it’s inhabited by a suitably motley crew of outsiders. They’re typified by single mother Nancy (Charlotte Stewart) and her daughter Mindy (Ariana Richards), Chinese grocer Walter Chang (Victor Wong), resident troublemaker Melvin Plug (Bobby Jacoby), and survival enthusiasts Burt (Michael Gross) and Heather Gummer (Reba McIntire). And then there is our pair of unlikely heroes, Val (Kevin Bacon) and Earl (Fred Ward), an odd couple of odd-jobbers whose one dream is somehow to escape Perfection. Tellingly, we first see Val pissing off the edge of a not-so-grand canyon.

Tremors takes its good-natured time setting up these characters and their interactions. As we follow Val and Earl on their daily round of trash dumping and septic tank pumping, we ultimately learn that Chang’s grocery store is the local watering hole and social center for most of the townsfolk. The film just as slowly unveils the true nature of its central menace—giant sandworms with snakelike prehensile tongues that are quickly dubbed Graboids—by parceling out the reveal in stages over a series of encounters with the creatures. It’s a clever tactic that pays off with a few choice jump scares of the old-school variety.

One of the film’s foremost charms has to do with the unselfish way in which the residents of Perfection band together to battle the Graboid threat. The idealized image of small-town cohesiveness thus put forward by the filmmakers has its roots, much like Tremors itself, in the culture of the ‘50s. Only here it’s the far more wholesome version of American life that was peddled by TV series like Leave It to Beaver. Fortunately, the film manages to put a fresh spin on the material through its eclectic, not just white-bread cast of characters.

Tremors is a film that exists in its present state as the result of a tug of war between the filmmakers and the studio suits. This is nowhere more evident that in the final scene, which, as it stands, ends with a kiss, a swell of strings on the soundtrack, and a crane shot. The original version sees Val and Earl, having trounced the Graboids, tearing ass out of Perfection, until Val decides the loss of Earl’s prized lighter is sufficient pretext to turn around, all the better to head back to the seismologist (Finn Carter) with whom he’s fallen in love. The original ending embraces a certain degree of ambiguity about the realization of Val’s newfound infatuation, where the studio-mandated finale leaves things tidily wrapped up with a gaudy ribbon.

Arrow Video’s 4K UHD presentation of Tremors leaves all previous home-video releases of the film showing their ass ends. Colors are staggeringly vibrant. Fine details, like the various products glimpsed on the shelves of Walter Chang’s shop, are crystal clear. Grain levels are well-maintained overall, though they can get a bit thick during some of the effects shots. There are no discernible blemishes of any kind to the image. Audio comes in three options: Master Audio stereo, quad surround, and a 5.1 surround remix. The stereo track replicates the theatrical experience, while the quad and 5.1 open the sound up considerably, getting a lot of mileage out of the lateral and rear speakers, delivering Ernest Troost’s wonderfully protean score, and giving the frequent ambient sound effects plenty of oomph.

Once again, Arrow has gone all-out in their packaging. Inside the slipcase there’s a 60-page softcover with essays by genre experts Kim Newman and Jonathan Melville, archival press kit materials, as well as information about the restoration. You also get two double-sided foldout posters: a larger one displaying new art from illustrator Matt Frank and a smaller one with Graboid X-ray art by Frank on one side and a reproduction of the Perfection welcome sign on the other. And tucked inside the keep-case are six double-sided lobby card reproductions.

The majority of the extras are on the UHD disc with the feature. There are two new commentary tracks: one by director Ron Underwood and writer-producers Brent Maddock and S.S. Wilson, the other by Melville, author of Seeking Perfection: The Unofficial Guide to Tremors. There’s a fair bit of anecdotal overlap between the tracks, as well as between the two making-of documentaries included on the disc, but each contains enough variety to justify a perusal. The archival making-of doc also contains footage of the original ending and leans more heavily into exploring creature the film’s creature effects, while the new doc “Making Perfection” is of the more standard talking-head variety.

Elsewhere, there are new interviews with several of the producers, DP Alexander Gruszynski, and composer Ernest Troost. “Pardon My French!” is a pretty hilarious overview of the profanity-replacing overdubs used for the TV version of the film. The disc is rounded out by deleted scenes, image galleries, and all the promotional spots you could ever want. The second BD-50 contains extensive interviews from “Making Perfection,” 10 minutes’ worth of outtakes with intro and commentary from Wilson, and three early shorts from the filmmakers. The two educational films have their quirky charms, but the real find here is Recorded Live, Wilson’s horror-comedy student film that succeeds admirably at both genres.

Arrow delivers a definitive home video release of Tremors, a pure sugar rush of a monster movie, with dollops of the action film and the western thrown in for good measure.