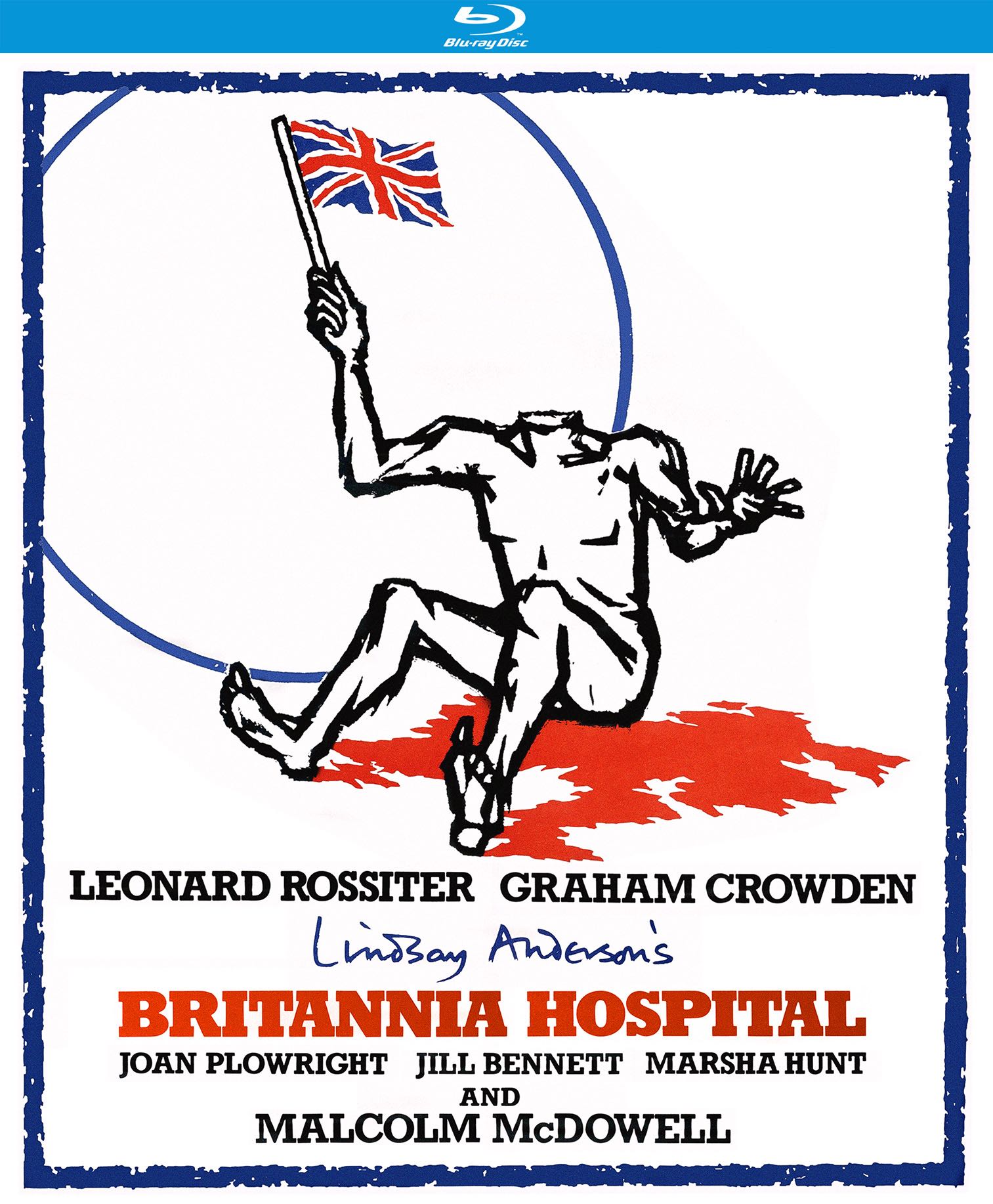 Across three decades, director Lindsay Anderson and screenwriter David Sherwin kept returning to the figure of Mick Travis (Malcolm McDowell) as a sort of working-class Everyman, featuring him in a loose-linked trilogy of satirical films. If…., from 1969, takes on the repression and brutality of the British public school system with the revolutionary élan of the counterculture, while 1973’s O Lucky Man! finds Mick, now a coffee salesman, suffering the consequences of colonialism and capitalism at a coffee plantation. Britannia Hospital, from 1982, not only lampoons the excesses of the National Health, but also uses its titular institution as a microcosmic cross section of society in the early years of Thatcherism. Whereas the earlier films kept Mick front and center as the fulcrum of events, here he’s more of a peripheral figure, a would-be guerrilla documentarian whose quest for an exposé weaves in and out of the film’s multiple, often overlapping, subplots.

Unfolding over the course of a single day, Anderson’s film finds Britannia Hospital preparing for a visit from the Queen (usually referred to simply as “HRH”) to celebrate the grand opening of an ultramodern new wing under the supervision of Dr. Millar (Graham Crowden). At the same time, two different groups of picketers besiege the building, objecting to unfair health care practices and the presence of a black African dictator and his entourage. The general tenor of these early scenes suggests points of comparison with several black comedies from the 1970s, like Robert Altman’s M*A*S*H and Arthur Hiller’s thematically similar The Hospital, which also features demonstrators and an unfeeling administration.

Britannia Hospital is antic, chaotic, and often strident in tone. The comedy keeps slipping without any notion of restraint from slapstick to broad satire to the blackest of black comedy. It’s true that everybody, even the workers and the protesters, get it in the neck at some point. But the film takes its greatest pains to hammer away at indifference and injustice. One of the choicest ironies it keeps harping on has to do with an individual’s decision to put self-interest and advancement ahead of solidarity to whatever group they claim to represent.

Just as the film’s style of comedy remains fruitfully unstable, it also keeps shuffling between genres as well, incorporating elements of science fiction and, perhaps most surprising, some pretty grotesque body horror. These aspects both center on Millar, Britannia Hospital’s resident Doctor Frankenstein. His stitched-together man goes to pieces in a geyser of blood and viscera in a moment that both looks back to Paul Morrissey’s Flesh for Frankenstein and prefigures Stuart Gordon’s Re-Animator. And it’s probably no coincidence that his operating theater closely resembles the design of the War Room in Stanley Kubrick’s Dr. Strangelove. That the film goes as far as it does with this scene is startling enough, but the fact that it also involves the presumed leading man is doubly provocative, even confrontational, which seems perfectly in keeping with Anderson and Sherwin’s undertaking here.

Millar’s backup project, known as Genesis, concerns the uploading of the human brain into an electronic receptacle. His showstopping presentation opens, reasonably enough, by excoriating the wastage of war and the over-privileged, before going on to dwell more macabrely on the limitations of the “feeble” human body. Millar’s technocratic fetishism thus aligns with the anti-humanism of any run-of-the-mill dictatorship that prizes “law and order” above all else. Not coincidentally, when this Genesis entity is finally revealed, it resembles nothing so much as a whirring, flashing, bleeping approximation of a mushroom cloud, perhaps in another gesture toward Dr. Strangelove. Instead of Vera Lynn hauntingly promising “We’ll Meet Again,” we get Genesis bungling the “What a piece of work is a man!” speech from Hamlet, freezing up on the phrase “how like a God.”

Frankenstein and Strangelove, together again for the first time—that’s Millar. Only his rampant charisma is forceful enough to unite the disparate elements struggling for control of Britannia Hospital. At his command, they sit quietly and attend to his demented parable concerning humanity’s future. Like any successful work of art, Britannia Hospital asks more questions than it can ever possibly answer. And nowhere is there a larger question mark than that hovering over the final sequence. We don’t know what Millar’s audience makes of his demonstration, but we really ought to give some serious thought about our own responses. Because much of Britannia Hospital—like the sight of riot squads kicking the shit out of unarmed protestors—resonates just a strongly today as it did back in 1982.

Writer and critic Samm Deighan delivers a thoroughly researched and compellingly delivered commentary track. She discusses the film’s thematic connections to earlier entries in the Mick Travis Trilogy, its numerous targets of satire, and its less than stellar reception among mainstream British critics. Deighan delves deep into Anderson’s career arc from film critic to filmmaker, touching on his early writings for Sequence and Sight & Sound, his association with the Free Cinema documentary movement, and his involvement in the burgeoning British New Wave alongside filmmakers like Karel Reisz and Tony Richardson. Along the way, Deighan frequently draws from a variety of sources (contemporary criticism, Anderson’s diaries) to further flesh out her points. In an archival interview from 2001, Malcolm McDowell discusses auditioning for If…., learning about cinema by watching films with Anderson, and describes coming up with his character’s backstory between O Lucky Man! and Britannia Hospital.

She Will Review: A Visually Overcooked, Narratively Underbaked Freak-Out