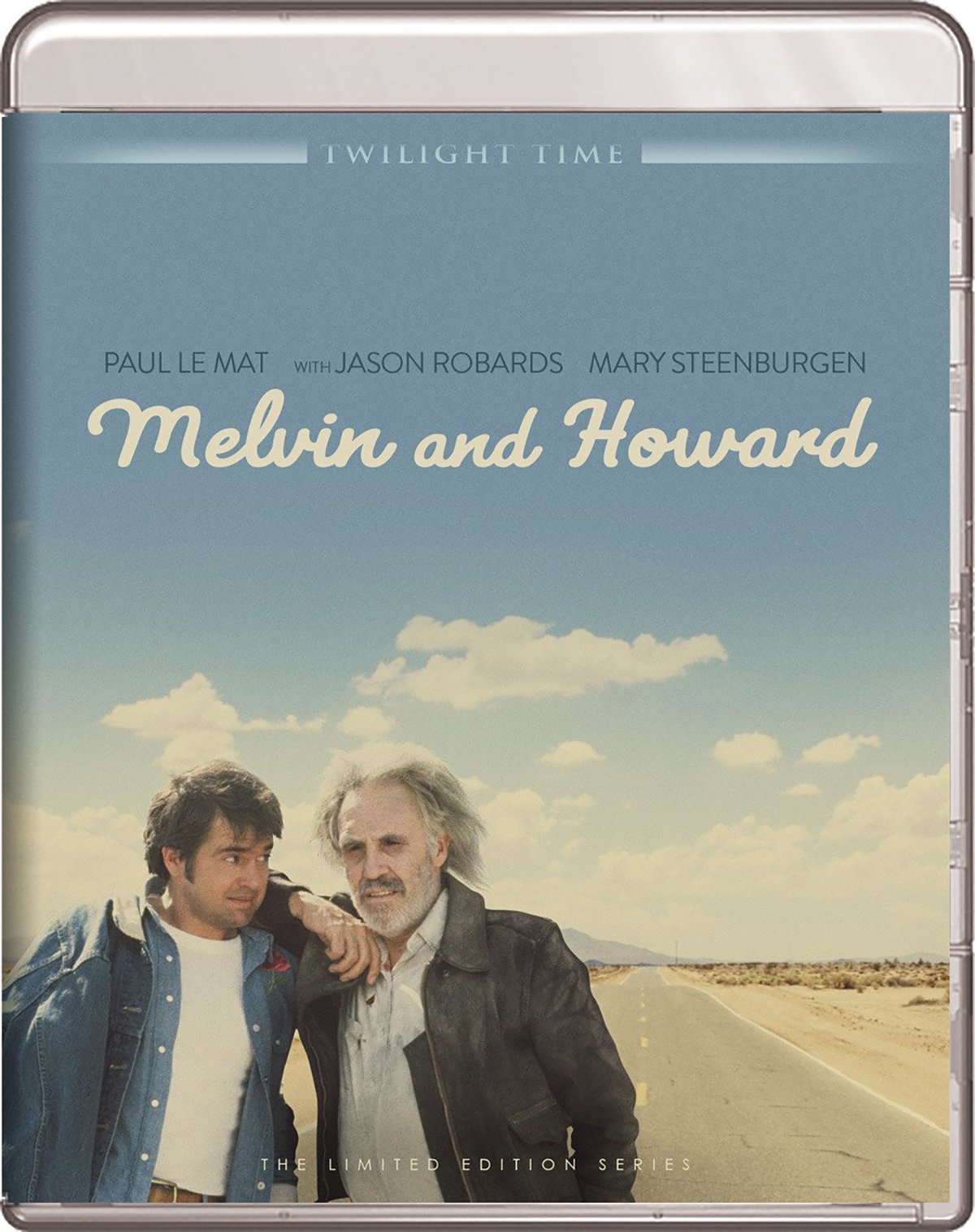 Perhaps the closest that Jonathan Demme ever got to making a New Hollywood film, Melvin and Howard is set in the impoverished outskirts of the Nevada desert, a place where the ritzy neon and modern decadence of Las Vegas turns into graveyards of rusted, stripped car bodies surrounded by pockets of RV parks. The symbolism of Vegas as a shimmering mirage that offers the false hope of instantaneous wealth and instantaneous success to the struggling masses just outside the city forms the bedrock of the film’s story about a quixotic hustler, and the tone that the setting creates befits Hollywood’s most cynical era of moviemaking.

Even here, however, Demme’s capacity for warmth is unmistakable. The master filmmaker introduces eccentric mogul Howard Hughes (Jason Robards) with magic-hour incandescence and copious lens flares as the man races over the salt flats of the desert on his motorcycle. It’s as if the glowing images exist to suggest that Howard is the owner of this vast dominion. Compare that to the first shots of Melvin Dummar (Paul Le Mat), seen driving desert roads at night in a truck so rusty that you may wonder when was the last time he got a tetanus shot. Melvin, cooped up in this vehicle as he drives across pitch-black roads, looks utterly powerless, a peon drifting through a world that barely notices him.

Melvin stumbles across a crash-wounded Howard by chance when he stops to relieve himself, and he agrees to take the man to his hotel after Howard refuses medical treatment. Demme fully illuminates both characters in the uncomfortable ride that follows. Melvin, chipper and extroverted, immediately comes across as a man who’s devoted an immense amount of effort to getting rich without trying. Bragging about inane schemes, such as penning a Christmas novelty song, Melvin suggests a more benign than usual snake-oil salesman, harmless in his understanding of the American dream to mean that you can make enough money to do whatever you want. Of course, he’s sharing a car with the embodiment of that notion of wealth, and Howard scarcely looks like he’s on top of the world when not indulging his thrill-seeking. Gaunt and pale in close-up, Howard almost looks like he’s in Noh theater makeup, his withered, wide-eyed face not unlike Tatsuya Nakadai’s Lear figure in Akira Kurosawa’s Ran.

Apart from a recapitulation of this scene at the film’s conclusion, Howard doesn’t appear again after Melvin takes him back to Vegas, but his presence looms large over the film’s subsequent study of Melvin’s various get-rich schemes and blinkered dreaming. We see how Melvin’s reckless optimism drives his first wife, Lynda (Mary Steenburgen, in an Oscar-winning performance), to leave him, then take him back when he crashes her new gig as a stripper in order to demand her return. Demme’s mastery of neo-screwball mechanics plays out in a brief comedy of remarriage in which Melvin and a pregnant Lynda hastily renew their vows in a Vegas chapel, which leads to a scene in which the pair is forced to fill in as witnesses for other eloping couples. The subsequent montage of newlyweds smooching Melvin and Lynda is riotous in part for the way the grooms are so enthusiastic about kissing Lynda, and much to the chagrin of some of their brides. The scene is quintessential Demme, blatantly absurd on its face as couple after couple comes in for a kiss from Melvin and Lynda, but suffused with a giddy quality that strangely pulls the couple closer to each other in their shared affections.

Throughout the film, Demme never stoops to mocking Melvin, even as the filmmaker abundantly illustrates how divorced from reality the man is. The limitations of Melvin’s worldview is perhaps best exhibited by his love of game shows as a path to quick money and notoriety, and he even manages to book Lynda on a sleazy program in which contestants have to perform for a crowd to get a shot at playing games for cash. Demme could easily have lapsed into the cynicism that this kind of semi-fame embodies, and at first blush he seems to give into it when Lynda goes on stage to perform a tap-dancing number that initially earns catcalls and boos. Gradually, however, her sheer tenacity and charm wins over the audience, and by the end she gets a standing ovation. The good vibes are short-lived, though, as Melvin uses the cash Lynda wins to buy a boat despite living in the middle of the desert, cheerfully calling it an “investment” as Lynda finally snaps and leaves him for good.

Melvin’s refusal to take any of these twists and turns of life as a sign of defeat marks him as a quintessential early Demme protagonist, his sunny disposition and constant self-sabotage existing in strange harmony. Eventually, Melvin comes to appreciate the possibility of a less reckless life, and after a time lapse, we find him settled into honest work and a content marriage to his second wife, Bonnie (Pamela Reed). Of course, just as Melvin appears to have found his position in life, he receives a copy of Howard’s will, which names him a beneficiary and launches him into a media circus that ironically brings him the fame he always desired.

Melvin and Howard ends with Melvin defending himself from charges of forgery by lawyers determined not to let a little thing like Howard’s eccentricity split the spoils of his estate. Melvin’s aspirational hunger certainly gives him motive to lie, but the film takes the man’s claim of honestly receiving a copy of the will at face value, preferring to play up the oddity of this insignificant person going up against mirthless, high-priced lawyers. Demme never stoops to mocking Melvin. If anything, he finds in the man his archetypal protagonist: a weirdo who in truth has more in common with everyone around him than even he realizes.

Twilight Time’s Blu-ray presents a sturdy transfer of the film. The bleak but beautiful panoramas of the natural world exhibit impressive color balance and contrast, showing off Tak Fujimoto’s incredible gift for on-location cinematography. Color tones are stable throughout, with only a few nighttime scenes showing signs of crushing. The lossless mono track is clean as a whistle, nicely separating dialogue and Foley effects throughout.

An audio commentary with Jonathan Demme and production designer Toby Rafelson is essentially a detailed celebration of the former’s subtle eye for detail. One particularly revealing moment is the acknowledgement that the stylized handwriting of the film’s credits were modeled after the real Hughes’s handwriting. One also gets a sense that, at the time of this track’s recording, Deeme hadn’t seen the film some time, as he frequently expresses appreciation and even surprise at some of the small touches in the actors’ performances. At times, he almost sounds less like the maker of the film than a devoted fan.

Jonathan Demme’s film is a repository for his comic, aesthetic, and observational gifts, and it receives a solid Blu-ray from Twilight Time.

Blu-ray Review: Jan Němec’s Diamonds of the Night on the Criterion Collection