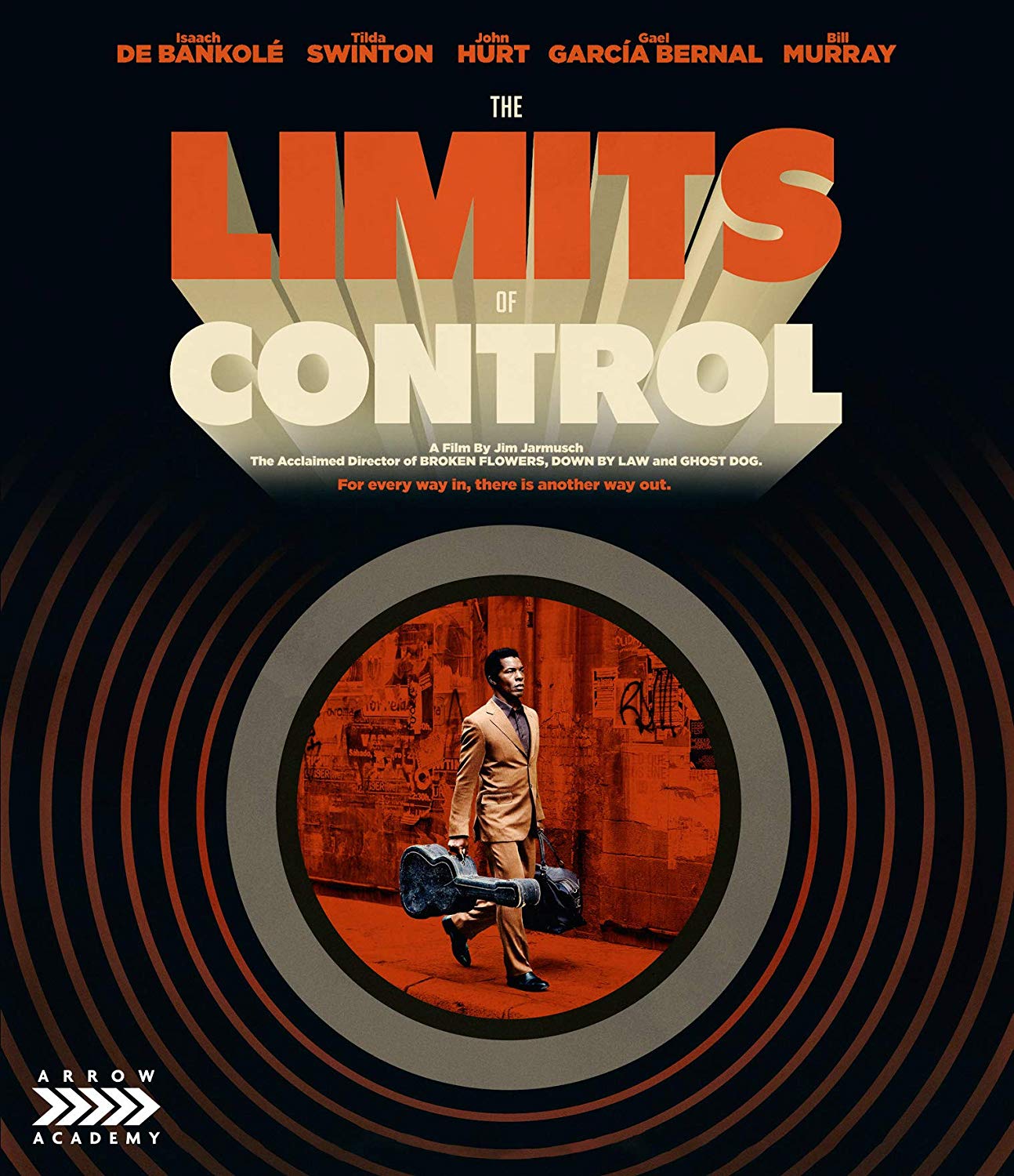 At the center of writer-director Jim Jarmusch’s The Limits of Control is a man identified only as the Lone Man (Isaach de Bankolé), a stone-faced figure perpetually clad in precisely tailored earth-toned suits. He alternates between strutting purposefully and waiting patiently in the cities and villages of Andalusia in the south of Spain. Seated at outdoor tables in Seville’s secluded, orange-tree-bedecked plazas, he meets with enigmatic types who exchange mysterious trinkets and coded phrases with him. “You don’t speak Spanish, do you?” each of them say in Spanish, proceeding to launch into a rambling excursus on a pet topic. The taciturn Lone Man listens attentively, though it’s not entirely clear whether he’s decoding secret instructions or genuinely interested in classic films, the etymology of the term “bohemian,” the provenance of the universe’s molecules, or peyote.

That is the long and short of the major action in the film, which deploys just enough generic codes to qualify it as a romanticized hitman flick in the vein of Jean-Pierre Melville’s Le Samourai but curiously withholds much of what one might expect from the genre. Namely, the story lacks the armature of a true plot, the decisive events and abrupt pivots one encounters even in Euro-existentialist interpretations of pulp detective fiction. The Limits of Control gives us existentialism without the fatalism: The Lone Man awaits not fate but understanding, a wisdom accumulated through conversation, experience, and imagination.

“Reality is arbitrary,” his unnamed contractor (Alex Descas) advises him in the opening scene, seated in a business-class lounge in Charles de Gaulle Airport. “The universe has no center and no edges.” It’s advice that the Lone Man appears to take seriously, as, laid over in Madrid, he spends his time contemplating cubist paintings in the Reina Sofia Art Museum. Cubism—inspired, incidentally, by the shifting perspectives artists encountered in early cinema—presents the world without a center, beyond the limits of control. Still, the film suggests that there’s a possibility of control that extends to the borders of the self: Every morning in his hotel room, the Lone Man wakes to perform a tai-chi-like exercise, cinematographer Chris Doyle’s camera following the slow, ritualistic movements, as patient as the man himself.

The Limits of Control isn’t what you could call a cubist film, but the absence of a centering discourse like a plot certainly gives it avant-garde vibes. A coal-black helicopter periodically appears in the sky, following the Lone Man through his languid trek through Andalusia. A mysterious femme fatale (Paz de la Huerta) crops up, lying nude on her belly in his hotel bed with her rear end perked up in the foreground of the frame, having seemingly jumped ship from a mid-‘60s Godard movie. No sex when he’s working, the Lone Man informs her, and no mobile phones either. Surveillance without worry, ambiguously threatening women without sex—these images exist more to be contemplated than as elements in a story to be followed.

Jarmusch has one of the Lone Man’s co-conspirators, a platinum-wigged, cowboy-hat-wearing woman played by Tilda Swinton, speak of her love of Hitchcock, as if to emphasize the film’s studious avoidance of suspense in any conventional sense. The Limits of Control is shot with a placid meticulousness that seems to stem more from Jarmusch than from Doyle (though some more chaotic, washed-out and time-axis-manipulated early shots of the highway outside Madrid evoke Doyle’s work with Wong Kar-Wai). Instead of a medium for action and suspense, The Limits of Control suggests cinema instead as a meditative tool, a means of contemplating and exercising our facility to affect the shape of reality.

Arrow’s Blu-ray presents a crisp and detailed image that preserves the vibrancy of the film’s Spanish settings to a greater extent than the previous DVD released by Universal. The saturation and range of the color constitutes an important facet of the film’s sense of atmosphere, as the yellows and oranges of Seville’s narrow streets and open plazas glow in the background of the Lone Man’s strolls and meetings. As the film’s sound mix is rather minimalist, the 5.1 audio track makes itself felt most when dreamy non-diegetic music envelops the channels, as when the Lone Man arrives in Madrid, or when we see Tilton Swinton’s character striding toward their meeting in slow motion.

Arrow has clearly dedicated a lot of effort to this disc’s extras, beginning with the reversible sleeve; you can opt for the cover art pictured above or one redolent of a classic post-noir French film poster. The booklet features an essay by critic Geoff Andrews that mostly focuses on Jarmusch’s work as a whole. Andrews leans a bit too heavily on the notion that Jarmusch is “misunderstood,” but he offers a substantive deconstruction of the filmmaker’s reputation as “the king of cool.” (Andrew’s encyclopedic knowledge of Jarmusch’s work is more effectively on display in the extended interview with him that’s included as a special feature on the disc.) Also included here is a feature-length documentary about the film, Behind Jim Jarmusch, that includes footage from the set, as well as conversations with Jarmusch about how he approaches directing actors and finding a story while shooting. Most helpful in providing a conceptual gateway into The Limits of Control, though, is the fantastic video essay by Amy Simmons, “The Rituals of Control,” which analyzes the film as a statement on the opposition of “aesthetic democracy” and “globalized capitalism.” Finally, the features are rounded out by an archival collection of location-scouting footage and the film’s trailer.

Obscure but unpretentious, Jim Jarmusch’s The Limits of Control pulls an intriguing fake out, deploying conventions of the existential hit-man story to lead the viewer to a contemplation of the relation between cinematic image and reality. It’s a film that, as Arrow’s excellent assemblage of features proves, is rewarded by post-viewing conversation.