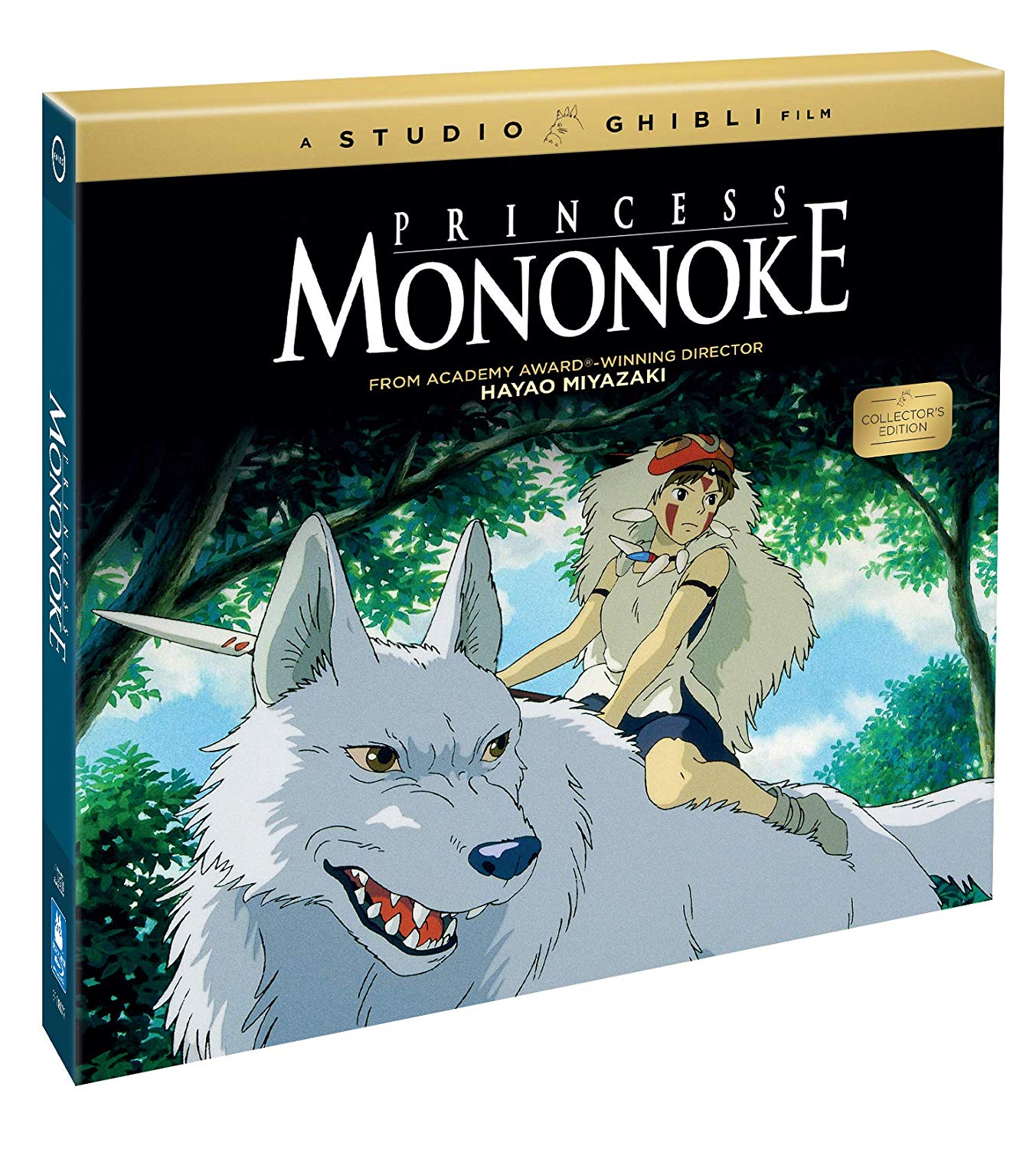 Miyazaki Hayao’s earliest films, from Nausicaä of the Valley of the Wind to Porco Rosso, abound in characters driven by an insatiable desire for adventure, and to take to the skies—a pursuit that offers a temporary transcendence of everyday reality. With a broom and an airplane, respectively, the main characters from Kiki’s Delivery Service and Porco Rosso cast off from a world that refuses to accept them for who they are, while the young siblings at the center of My Neighbor Totoro use the eponymous creature to ascend into the clouds and forget the problems that afflict their ailing mother, if only for a while.

It’s a stark contrast from that recurring motif in Miyazaki’s animated worlds that the characters from his 1997 film Princess Mononoke never take flight. It’s as if Miyazaki, by keeping them earthbound, is trying to remind them of the greed, vengeance, and lust for power that’s led to the destruction of their world. Indeed, there’s no escaping the increasingly dire consequences that arise from the environmental annihilation that occurs in the film.

A parable of man versus nature, Princess Mononoke is a damning, pessimistic, and downright angry environmentalist screed. But in refusing to draw a line in the sand between good and evil, Miyazaki presents a thoughtful, intelligent mosaic of visual and thematic ideas that ignores neither the brutal elements inherent in nature nor the potential for courage and compassion that lies within mankind. In the film, humans and animals alike are full of contradictions, which serves to consistently complicate Miyazaki’s initially straightforward message of humanity’s thoughtless destruction of the natural world.

Set during Japan’s medieval Muromachi period, during “a time of gods and demons,” Princess Mononoke follows the exploits of an idealistic young man, Ashitaka (Billy Crudup), who sets out on a journey from his small, rural village to the enchanted forests out west after being poisoned by a demonic boar. In typical Miyazaki fashion, the beast is a feat of unbridled imagination, yet that blood-filled mouth and those dozens of red tentacles protruding from its body are far from fanciful, planting the creature firmly in the realm of body horror. Once the beast is slayed, the cause of its terrifying transformation is revealed to be an iron bullet lodged in its chest, which is taken by the villagers as a sign of an imbalance in the lands out west.

On the flipside of the ghastly boar is the legendary Deer God, a strange yet elegant creature who protects the vast forestlands and is rumored to have the powers to heal both man and nature. As Ashitaka tracks down this mystical animal, hoping it will cure his poisoned arm, he finds himself playing the part of mediator between two warring factions. On one side is Lady Eboshi (Minnie Driver), the rapacious ruler of a remote settlement named Irontown and owner of its iron factory, whose expansion necessitates the destruction of the nearby forest lands. And fighting to stop her are the wolves led by the wolf god Moro (Gillian Anderson), and the human she raised as her daughter, San (Claire Danes), also known as Princess Mononoke.

At first, there seems to be an ethical clarity to this conflict that makes it easy for the audience’s allegiances to turn in one direction and never waver, but moral certitude becomes increasingly muddied as Princess Mononoke progresses. While Lady Eboshi essentially functions as the film’s central villain, pumping her surroundings with weapons and pollution, she also shows a remarkable capacity for compassion, hiring and caring for a slew of lepers and prostitutes who shunned by society at large. Her workers are happy and faithful to her, and even the munitions she creates serve the greater good, as they’re used at one point to fend off a band of samurai robbers. And despite Ashitaka’s general desire to prevent warfare and save the wilderness, he’s driven by his own selfish goals of attaining the help of the Deer God. Even the natural world bares its teeth, as wolves, boars, and apes fight among themselves to establish dominance even as the world around them literally falls apart.

The film relishes in the beauties of the natural world, but Miyazaki doesn’t see nature as infallible or humans as irredeemable. The Deer God itself embodies the capacity for both creation and destruction, as grass and flowers grow beneath its feet wherever it steps, yet it can also kill living creatures with as little as a glance. Where Miyazaki lends the humans and animals in Princess Mononoke a sense of ambiguity, he’s unflinching in his belief that it’s our moral duty to seek a balance in the natural world that supports the whole in order to benefit all life cycles. For all of the film’s bloodshed, which by Miyazaki’s standards is quite shocking given the plethora of severed limbs and decapitations caused during battle, it’s the majestic and magical qualities of the untouched portions of the forest that linger strongest in one’s memory. From the kodama, the adorable and ghostly forest spirits who make strange clicking sounds as they shake their heads, to the Deer God, who at night transforms into The Night Walker, a translucent, shimmering giant who safeguards the forest from above, Miyazaki’s flair for embellishment makes clear his affection for the natural world.

After one too many human transgressions, The Night Walker turns into a black ooze that quickly spreads over the lands, destroying plants, wildlife, and humans in its wake. In an act of heroism, Ashitaka returns to the gargantuan creature its severed deer head, and in a particularly stunning sequence, Miyazaki shows the barren landscape slowly coming back to life. The innate power of nature is presented as a kind of magic trick, suggesting that even if humans drive through the Earth’s resources to the degree that the planet becomes uninhabitable, it will ultimately find a way to regenerate itself. Of course, Princess Mononoke also appears to believe that if humanity itself wants to stick around, it must seek a sustainable balance that doesn’t let things get too close to that point of no return.

Shout! Factory’s transfer of Princess Mononoke might just be the most stunning home-video presentation that any Hayao Miyazaki film has received to date. There’s an impressive clarity to the images that makes it impossible to not fixate on every textural dimension of the animation, from the film’s most elaborately conceived creatures such as the Deer God and possessed boar, to simpler elements like grass, flowers, trees, and animal fur. The colors are truly eye-popping, particularly the greens of the natural world and the bright, rich reds of blood and the fabrics of characters’ clothing. On the sound front, Joe Hisaishi’s dynamic, emotional score is beautifully layered throughout the dense, enveloping soundscape.

In place of a commentary track, Shout! has included the option to view Princess Mononoke with storyboard stills of every shot in place of the final animated frames. These sketches are often crude, but the presentation is fascinating for allowing us such a detailed glimpse of Miyazaki’s vision in its nascent stage. The very simplicity of the sketches offers a compelling contrast to the rich, fully materialized world of the finished film, highlighting the staggering amount of time, effort, and imagination that goes into constructing a hand-drawn animated film. The featurette “Princess Mononoke in the U.S.

Shout! Factory’s stunning transfer and superb packaging and extras ensure that this will remain, for many years to come, the definitive home-video release of Hayao Miyazaki’s film.

The Gray Man Review: The Russo Brothers’ Flat Cocktail of Ultraviolence and Snark