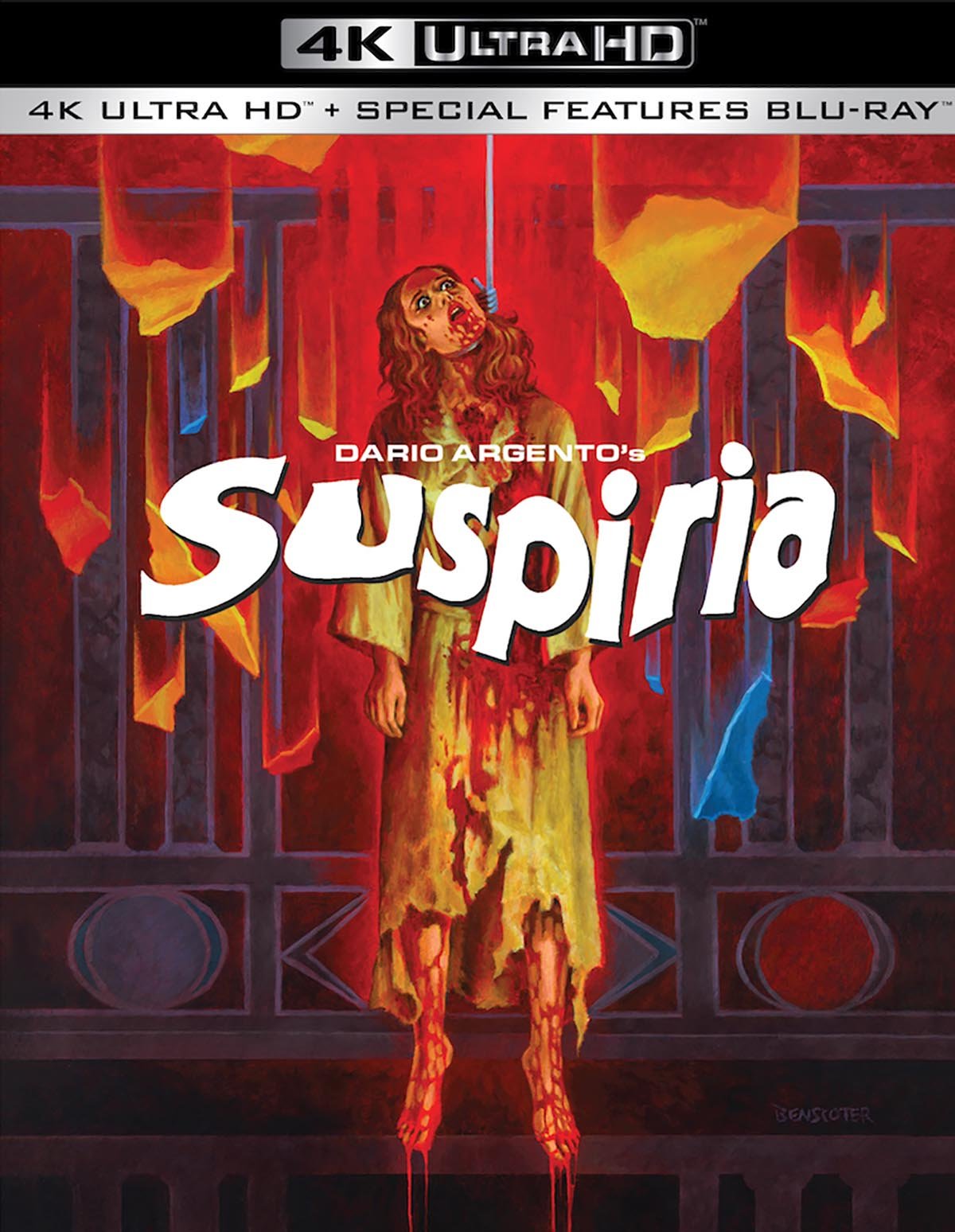 In the giallo, as practiced by masters such as Mario Bava and Dario Argento, there’s an amoral yet almost joyful grasp of death as simply being a matter of aesthetic. The blood in these films is intentionally fake—gorgeous, garish paint that exists as another hue to complement the explosion of colors that define the giallo’s often extraordinary set designs. When a character splashes red wine all over a porcelain sink in Suspiria, Argento highlights the similarities between the drugged drink and the blood that splatters robustly throughout the film. It’s a joke on the nature of the giallo, linking violence to consumption, a sensual intertwinement that also leads inevitably to sex.

Suspiria is set in a dance academy in Germany, but Argento makes little effort to eroticize the dancers while they’re living, and they’re pointedly denied sex lives. The hallmarks of films concerned with perfecting dance—the scenes in which we see dancers dancing—are almost entirely elided. We see the American protagonist, Suzy (Jessica Harper), dancing once, and she becomes ill and is rushed out of class. Argento is more concerned with the architectural specifics of the academy, which is rich in labyrinthine hallways awash in explosions of red, blue, green, and black, dotted with malevolent mirrors and windows that suggest eyes as well as portals into other dimensions.

Suspiria is the ultimate horror film as baroque-rock concert. Retrospectively, it doesn’t feel negligible that it was released a few years after The Rocky Horror Picture Show and in the same year as Low, the first album in David Bowie’s Berlin trilogy. All three works bridge cinema and music while mining the hangover setting in from the debauchery of reactionary 1970s-era politics and counter-reactionary urban night life. There’s a sense in all three works of sex as having gone bad or having at least twisted itself beyond even the understanding of the inherently twisted—of revolutionaries being unable to grasp the power of primordial fascism. The German settings of Low and Suspiria aren’t incidental. As exuberant as Dr. Frank N. Furter can be in his transgressions, his actions nevertheless exude a whiff of desperate over-compensation. True to its title, Low is about the weirdly qualified beauty of bottoming out, while Suspiria similarly mines an eroticism of annihilation.

Regarding the prestigious Tanz Dance Academy’s luridly colored hallways, the audience may feel as if it’s looking at a building that’s set inside of a giant human heart that happens to house a gallery of classic and modern art. With all of Suspiria’s hallucinatory excess—including dizzying levels of prismatic imagery—one never quite knows where to look, which produces an anxiety in the audience that parallels Suzy’s mounting terror. These sets blend German expressionism with the neurotic Technicolor passion of films like The Wizard of Oz and The Red Shoes. Suspiria’s influence on other filmmakers is also difficult to overstate: A shot of curtains moving supernaturally behind Suzy has the velvety tactility of the curtain imagery in David Lynch’s productions, and the highly controlled mixture of found buildings and fastidious set design bring to mind the architectural formalism of Wes Anderson.

In death, however, the dancers are allowed to bloom. In one of the most beautiful and disturbing murder scenes committed to film, Pat (Eva Axén) is pulled through a bathroom window and stabbed repeatedly with a knife while atop the stained glass sunroof of an apartment complex. Characteristically of Argento, the building suggests an Art Deco theater of ultraviolence, and Pat’s murder virtually offers a pun on the phrase “danse macabre.” Before she’s lynched and thrown through the sunroof, her face is shown to be smeared in red lipstick that complements her blood-splattered body, and curled into an expression of terrifying, orgasmic ecstasy. In destruction, she finds freedom from the limitations of corporeality—becoming the sort of art object which dancers attempt to render themselves. The witches running this academy are true to their promises of allowing the dancers to perfect their craft.

Suspiria’s murder sequences also revel in the traditions of dance and rock music. Each killing is accompanied by Goblin’s equally elaborate synth score. The killings serve as choruses within the film, while the preceding stalking in hallways and deserted courtyards suggest musical bridges. Imagery and sound are intricately linked, as the murder sequences are chopped into hard fragments of incident, while the stalking is rendered in sensual tracking shots that gradually build to the catharsis. And the music is always with us, particularly the sounds of cooing and sighing that suggest that the very film itself is alive and breathing. (“Suspiria” is Latin for “sighs,” as this film was partially suggested by Thomas De Quincey’s 1845 essay “Suspiria de Profundis.”)

Suspiria is overwhelming in the breadth and intensity of its aesthetic, offering a radical departure from the sporadic surreality of Argento’s prior gialli. The aesthetic weds with the irrational and sketch-like narrative to fashion an abstract horror film that’s more closely aligned with A Page of Madness than with the American slasher genre that arose in the 1970s, partially in response to Argento’s early films. Argento plunges the audience into Suzy’s fragile consciousness, painting a rich and bottomless tapestry of fear.

Not even 18 months ago, Synapse released their Blu-ray edition of Suspiria, boasting a brand-new 4K restoration of the Italian 35mm camera negative, personally supervised and approved by cinematographer Luciano Tovoli. And while the results were as much as any fan of the film could have hoped for, rightfully topping many year-end home-video lists, the urge to resist purchase until Synapse saw fit to unfurl the fruits of their labors in full 2160p was very real. Thankfully, the wait has proven brief, and favors those among us who chose to wait it out.

Every superlative one could lay on last year’s edition deserves to be amplified in exponential proportion. The sensuality of the film’s primary color palette now emerges as enchantingly tactile; the reds, for instance, have gone from loud to luxuriant. The rich depths of its visuals now flourish, as though your eyes have been given a chance to adjust to the darkness and can see with more nuance beneath the surface than you initially thought possible. The clarity and cleanliness of the print doesn’t just feel like the results of a top-notch Telecine bath, but as if the viewers have been sent back in time to 1977 and are donning a pair of white, cotton gloves to inspect the actual reels up close. The famous interlude in which one of the dance school’s ogre-like cooks flashes light into Suzy’s eyes with a knife, revealing a hallway filled with undulating clouds of dust, is as good as any single shot from a vintage film I’ve ever seen on home video, excepting any of the film’s other four or five dozen showstopper shots.

Synapse didn’t give just the images more breathing room. New to this edition is a Dolby Atmos soundtrack option, which whips an already scarily active sound mix into overwhelming overdrive. To my ears, it sounds like it takes some big liberties with balance and reverb, but it will be awfully hard for purists to carp over because Synapse also retained the prior Blu-ray’s DTS-HD Master Audio presentation of the original English-language track as purportedly used for Suspiria’s original 1977 release. (Also included is the original Italian track, for those who can’t handle the sometimes loose dubbing.) We’re still in the nascent stages of 4K releases for the classics, but Suspiria holds its own even when stacked against many new releases.

Synapse ports over the extras from their Blu-ray edition without adding anything new, which is to say that this is an essential package from top to bottom. One could still lament that they weren’t able to find a way to recycle a few of the better extras from other home-video editions. Specifically, the absence of the documentary “Suspiria: 25th Anniversary” from the 2001 Anchor Bay release wipes out firsthand testimonials from most of the film’s actual cast and crew, including Jessica Harper, Daria Nicolodi, Stefania Casini, and Dario Argento himself. (Only the 20-minute interview with an admittedly jovial and engaging Barbara Magnolfi, who plays the squawking, snakelike Mata Hari Olga, makes up the difference.) That aside, the set offers up scholarship and historical context in every flavor a cinephile could hope for.

The first disc features two separate commentary tracks. Each is informative in its own way, even if they occasionally repeat some of the same information between the two, as all participants are authors and historians on giallo and genre films, and Argento specifically. A flashier and more bite-sized distillation of what the commentary tracks have to offer comes in the half-hour featurette “A Sigh from the Depths,” which widens the pool of participants—again, almost entirely all authors. The featurette explores the film’s themes of witchcraft, central Europe’s “Magic Triangle” of evil, Daria Nicolodi’s role in altering the course of Argento’s career, the fact that he wanted to cast his horrific fairy tale with actual preteens, and the cinematographic innovations unlocked by Luciano Tovoli.

“Do You Know Anything About Witches?” finds filmmaker Michael Mackenzie walking viewers through an abridged cut of the film, while his narration dances in and out of subjectivity and criticism. It is, in effect, a third mini-commentary track. And finally there’s an exploration of the film’s German locations, including the public square where the blind pianist is gored by his guide dog and where, in the 1930s, Hitler staged book-burning Nazi rallies.

With their 4K release of Suspiria, with gorgeously sumptuous images and multiple enveloping sound mixes, Synapse Films takes what was already arguably the best single-title home-video release of 2018 and makes it exponentially more essential.