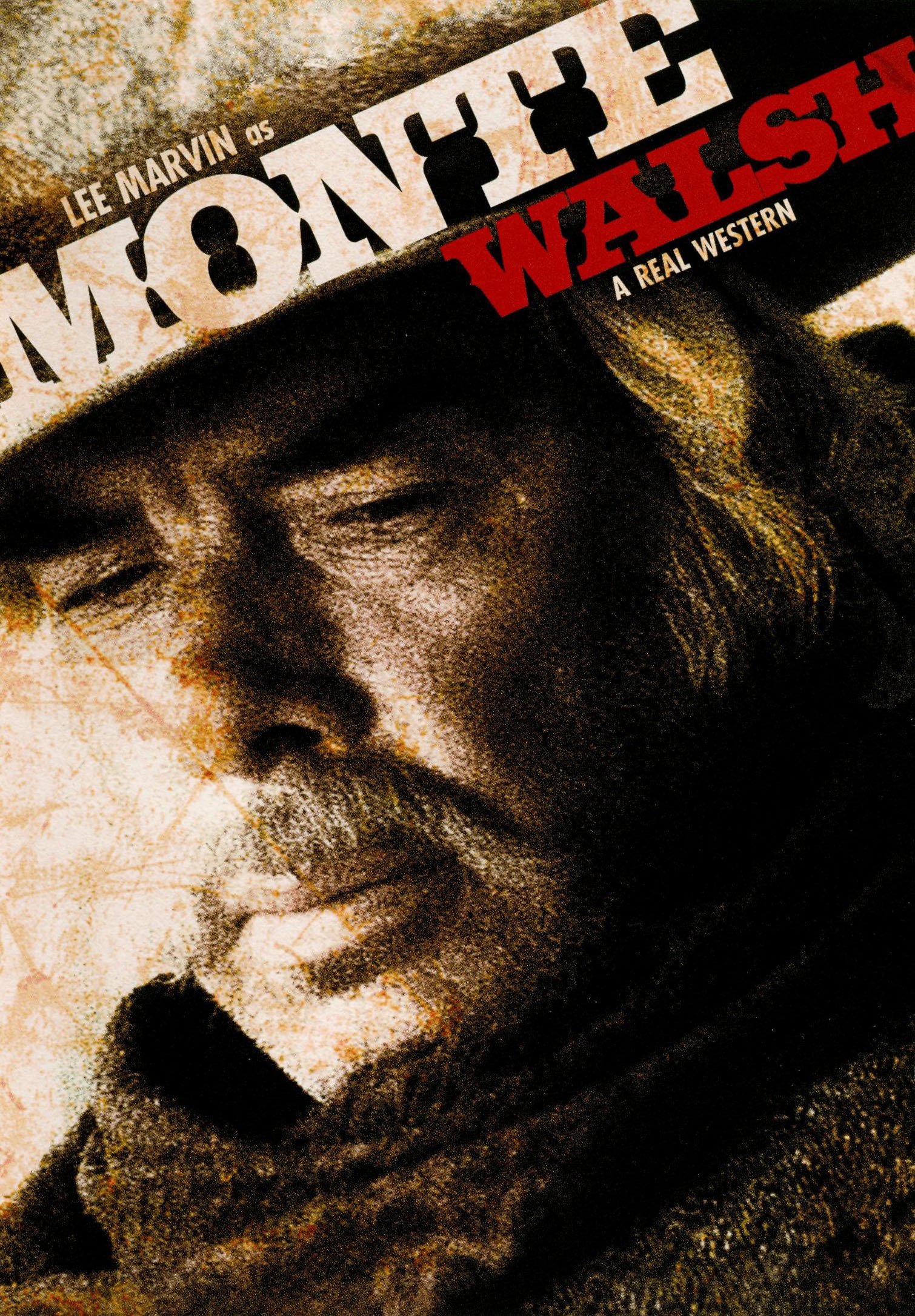 For cowboys, farmers, hunters, and trackers trying to prolong the final death rattle of the Old West, evolving economic functions and political motivations bring their very purpose, profession, and social code into question. Inevitably, the pressure of change and the threat of inconsequence can wear down even the grittiest roughnecks. These themes are obsessions for the films of Sam Peckinipah, be it the historical ramifications of such a transition in Pat Garret and Billy the Kid or the modern emotional toll it takes in Junior Bonner. Mortality is also essential for Nicholas Ray, whose The Lusty Men confronts the commercialization of the western by suggesting even a bronco-busting rebel can get sucked into the capitalist machine. But William A. Fraker’s Monte Walsh, a bona fide hybrid of classic genre tropes and revisionist emotional bursts, might be the most singular cinematic example of worn-out cowboys in ideological crisis. While all of these films pursue the small moments where men like Monte (Lee Marvin) realize their way of life has an expiration date, Fraker’s film complicates the setup by relishing in the camaraderie of its characters, using a strange mix of comedy and retribution to stave off the inevitable downfall.

Which makes the lighthearted opening credits of Monte Walsh all the more fascinating and ironic. Juxtaposed with colorful etchings of western iconography in motion, Mama Cass’s melancholy “The Good Times Are Coming” perfectly introduces the hopeful durability of Monte, his best friend Chet (Jack Palance) and the collective of lifelong cowhands at the film’s core. The importance of past histories becomes important from the very beginning, as Monte and Chet mosey across a wolf during their return to civilization after a long winter. Monte raises his gun to shoot the animal, only to get interrupted by his own stream-of-consciousness thought process that he verbalizes to Chet. “Do you remember Big Joe Abernathy? He used to wrestle wolves.” Impatient and annoyed, Chet grabs the gun from him and shoots the wolf dead. Monte often bathes in the nostalgia of the past, and he often masks his fear of the future with such fond asides.

The tides of change are apparent from the very beginning, as ex-rancher-turned-big-business proxy Mr. Brennan (Jim Davis) informs Monte and Chet that a corporation called Consolidated Cattle has bought out many of the local livestock outfits, laying off workers and closing down nearly every operation. When Monte asks who’s running Consolidated Cattle, Brennan responds, “Mostly accountants.” This motif continues, making the distance between Monte’s reality and the power of absent Eastern businessmen one of the film’s striking dichotomies. Workers become expendable, vast open ranges must be roped off, and the term “money” is replaced by “capital.” The fact is modern capitalism has arrived for Monte and Chet, and it’s unseen influence begins to erode the very nature of their cowboy way. Monte even confesses doubt to his working girl love interest Martine (Jeanne Moreau), saying, “I wish I knew something besides cowboy-ing.” The worry shines through Marvin’s eyes and his slouching frame, all pointing to the stranglehold of impending transition.

But thankfully, Fraker doesn’t force his characters into an overly melodramatic situation, instead focusing on the cowboys as a group of men at peace with their current position. They take turns playing pranks on each other, tussling to let off steam, all while doing their job of corralling and taming horses. In one particularly resonating scene, Monte and his friends tackle their smelly cook and force him into a giant vat of water, gleefully cleaning the stench from his body. It’s a lovely example of the adaptation these men are capable of. It’s not until later, when a few of Monte’s friends get laid off, including a young upstart named Shorty (Mitch Ryan), that personal lives begin to experience the dire ramifications of their fluid cultural surroundings. Monte and Chet react very differently to the realization that cowboy life is about to end, the former restlessly staying on as a cowhand while the latter marries a widower who runs a hardware store. Monte’s reaction to his friend’s domestication is understandably conflicted. “Cowboys don’t get married, until they aren’t cowboys anymore.”

Their diverging paths as men and citizens amplify the tonal and ideological crossroads at the heart of Monte Walsh. The movie takes on a more improvisational feel during its second half, lessoning the need for plot in favor of subverting traditional imagery of the western. After Chet’s wedding, Monte walks through town, the sidewalks and saloons devoid of sounds or people. Time seems to stop, and the excitement of the old west has completely evaporated. What makes the character and Marvin’s nuanced performance particularly revelatory in these moments are his sudden fits of inspiration, like when Monte comes across a wild bronco named “Grey.” In the film’s most enthralling moment, Monte jumps atop the horse, which immediately starts bucking violently, and hangs on for dear life. The horse crashes through the coral fence onto the town’s main street, then careening up stairs, ripping out posts, and causing irreparable damage to the “civilized” space. This primal beast reminds of the chaos and power that once ruled the west, and Monte loves every second of it. Not surprisingly, he tells the horse “thanks” after winning the battle for control.

Ultimately, Monte Walsh uses the underlining frustration and tension to construct a final chapter infused with violence and revenge. The last shootout is just another example of how Fraker challenges our notions of genre, pitting Monte against the murderous Shorty not at high noon in the public forum, but at the darkest of night inside a cattle-processing barn. Shadows, silence, and anticipation become the key factors, as the time for honor and presentation have long since passed. But that doesn’t mean Monte doesn’t abide by his self-imposed western code. Even though the world is changing, one man doesn’t necessarily have to. This is most evident when he tells a Wild West Show promoter he won’t “spit on my whole life” and become a bastardization of his former self for public consumption. No, Monte rides off into the unknown still contemplating Big Joe Abernathy in the company of his horse, fulfilled enough to understand that his role as a cowboy depends on his own devotion to the machinations of an honorable life. It might be a “profession of diminishing returns” as Martine so astutely puts it, but it’s one the devoted followers will always find beautifully worthwhile and necessary.

Since this is the DVD premiere of Monte Walsh, the visual transfer is exponentially better than the previous VHS incarnation. That being said, much of the film is bleached a shade too yellow, a hazy visual motif that doesn’t seem to be apart of William A. Fraker’s compositions. This affects the color schemes throughout, making an already monochromatic brown landscape even more tinted. The interior scenes are nicely balanced, with shadow delineation leveled as much as possible. The sound design is adequate but nothing transcendent, mixing the musical cues nicely with the dialogue while never overpowering any one track.

Only a theatrical trailer, which is unfortunate because Monte Walsh and its place in the revisionist western canon deserve a more comprehensive unveiling on DVD. Maybe the Criterion Collection will take note.

Like it says on the DVD cover: Monte Walsh is “a real western,” but one with a depth of character and conflict that resonates beyond genre and into layered examinations of historiography.