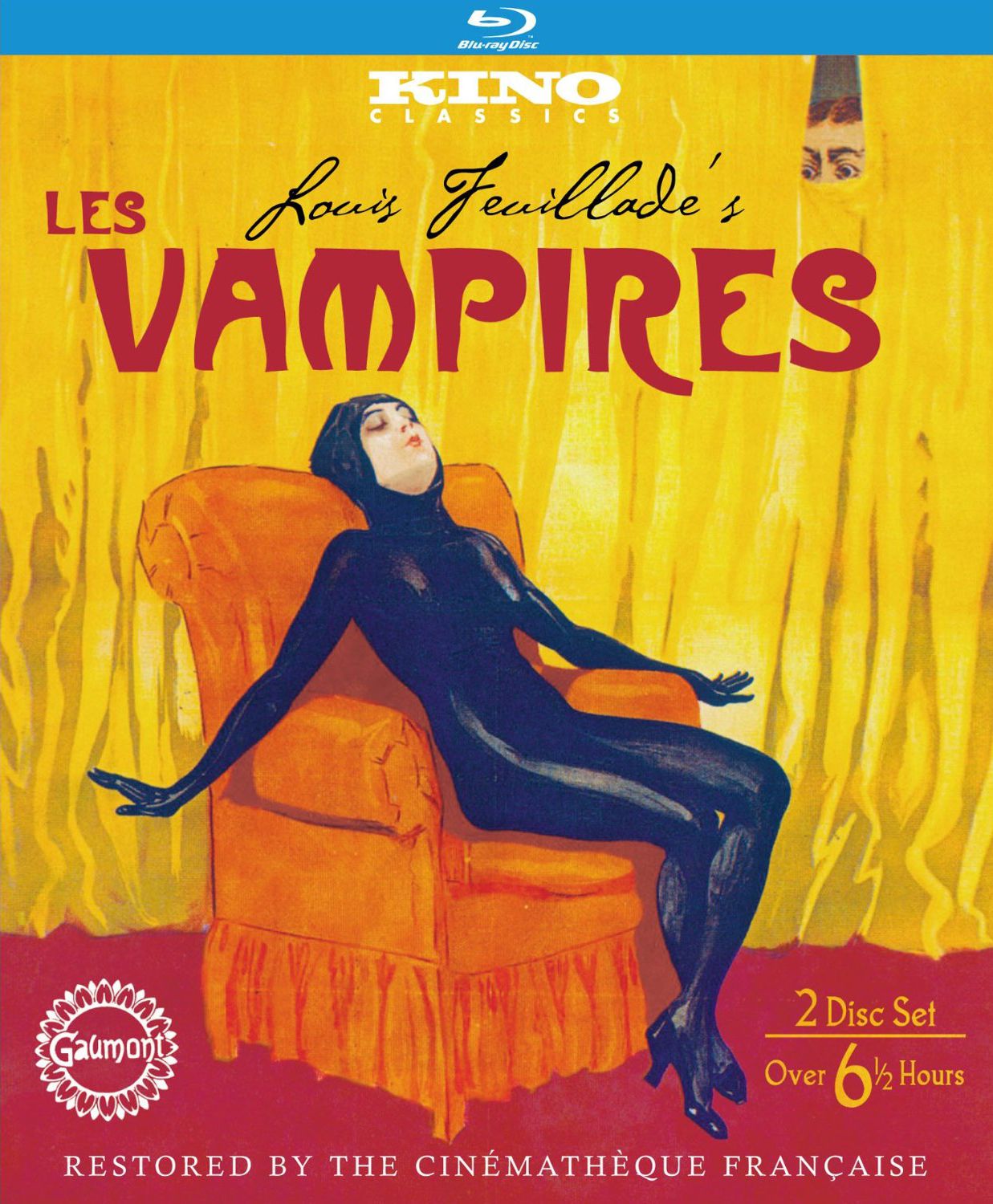 There are few moments in Les Vampires’s six-plus hours that aren’t freighted with crisis, where a nefarious scheme isn’t being brocaded at one end and unraveled at the other. At the start of most of the 10 episodes, we learn that the Vampires (Paris’s most infamous gang), or a rival band of criminals, have gained an advantage over our heroes: that the crooks have kidnapped a damsel, or have assumed the identity of a nobleman in order to commit a convoluted robbery. Then, after scuffling that never runs longer than an hour, a return to normalcy is brokered by the derring-do of investigative reporter Philipe Guérande (Édouard Mathé) and his buffoonish, eggplant-nosed assistant, Mazamette (Marcel Lévesque). (These are early, Tintin-esque journalist/detective hybrids.) “Background information” is never vulgarly spewed; characters’ personalities are revealed and tested in extremis. The plot lines furthermore never tempt our sympathies with the internal lives of those committing or busting crimes, instead seeking our investment in the ratcheting of conflict solely for the reward of a resolution. Like a house built to facilitate the spectacle of its eventual razing, Les Vampires represents “thriller” storytelling at its most teleologically precise. Its design is predicated on the poetry of its dismantlement.

Writer-director Louis Feuillade’s nearly hysterical emphasis on action throughout pauses only to set up denser action; one of the film’s slowest sequences involves the meticulous assembly of a cannon, which provides a fair enough metaphor for the series’s alternately meticulous and explosive tone. This creates a universe of self-evidence constantly smeared into motion—of “personality” or stereotype rather than motivation (the characters have none), of external rather than internal conflict (there are many characters of which to keep track, but none doubt themselves), and of “situation” rather than plot. Though inflamed with exposition (there are unholy alliances, gang wars and defectors and corrupt law enforcers, deaths and rebirths and re-deaths), the stories forego logical structure for a maniacal relentlessness. The characters are flung at hazards like razors at a constellation of self-contained pimples that then leak putrescence and shrivel. No two scenarios relate readily to one another: Philipe Guérande’s mother is kidnapped; an elderly banker is executed and impersonated; the infamously un-killable and moon-faced assassin Irma Vep (Mlle. Musidora) is hypnotized and seduced. Interconnectedness is avoided for the sake of visceral rhyme.

Feuillade’s universe of frenzied “what you see is what you get”-ness can feel shockingly modern because of its simplicity—because it utilizes the occasion of the moving image to reduce story, rather than to complicate it, though seldom at the expense of plausibility. There’s a smattering of plot holes in Les Vampires, but no phantasmagoric grout to fill them in; Feuillade chases the cheap thrills of literary antecedents such as Edgar Allan Poe, Arthur Conan Doyle, and penny dreadful one-pagers into what looks and feels like concrete reality. The camera’s tendency to absorb space broadly and statically, as in the Lumière brothers’ studies, assists this feeling; aside from close-ups that clarify the text on written documents, or the poison-tipped pin hidden in a leather glove, we’re free to roam the images’ frightful, proscenium-like vastness. The result is an aesthetic of plainness that amplifies the lurid subject matter, sometimes to the point of disorientation. When an imprisoned man rises from his bunk after ostensibly swallowing a blotter of cyanide, the film’s fidelity to realism seems to halt in mid-somersault, with blood rushing to its brain; when Irma Vep dances her tail off in a Vampire-run nightclub, she looks set to emasculate the camera by biting its lens off.

These unexpectedly sensational flourishes also cause us to doubt the boxy, pre-Griffith straightforwardness of the mise-en-scène, which eventually takes on an uncanny quality. Most of the film’s pleasures are visual curios as inexplicable as they are irreducible—possible, sure, but only in the sense that life is always stranger than fiction. There are the pitch-black, shape-hugging spandex suits in which the Vampires prowl the rooftops after murder and theft; a soirée that ends with the gassing and robbing of its rich guests; and the network of hidden compartments and secret doors in the guts of a massive country estate wherein one might find a sputtering, innocent guest or a severed human head, frozen in mid-gasp. Feuillade’s nearly banal staging of these horrors constitutes a chilling sangfroid underscored by the film’s wide-framed, audience- rather than character-oriented POV; the stationary camera mimics our awe-locked voyeurism, daring us to react without the aid of affective cues. Like a documentary punked with theatrics, Les Vampires’s challenge is three-fold: to see, to believe, and to keep on believing, even while the world hangs from a preposterous thread like a displaced eyeball dangling out of its socket.

A point not made in my above blithering: Les Vampires was printed to celluloid nearly a century ago. To say that the film “looks good considering its age” is to forgive showing sprocket wear, several moments of brightness that render the action unintelligible, and a generally volatile image. But it’s a credit both to the restorative work of the Cinémathèque Française and to Louis Feuillade’s dramatic genius (however primitive the latter might appear) that such blemishes fail to distract from the wild tension-and-release rhythms of the serial, or its myriad visual accomplishments. (In a sense, the latter are made even more apparent by the trip-happy frames; we feel the violence of every cut, for instance, as though each were being made with a paper guillotine.) Tinted passages have also been (presumably) digitized, but without compromising any of their ramshackle charm, and the spotless telecine work represents the well-worn print without a single artifact or combing error. It’s as good a compromise between ever-advancing restoration technology and ever-corroding nitrate as I’ve seen; this is, very probably, the best that Les Vampires will ever look. The new chamber score is mixed quite well, though it’s a pretty conservative composition—something a bit closer to Stravinsky’s riot-inducing ballets from the same period may have been more appropriate.

Goose eggs! There’s a trailer, weirdly, for Feuillade’s earlier serial, Fantômas (not yet on Blu-ray), but a visual essay or featurette would have been a helpful, historical context-adding supplement.

Blu-ray Review: The Dardennes’ La Promesse on the Criterion Collection