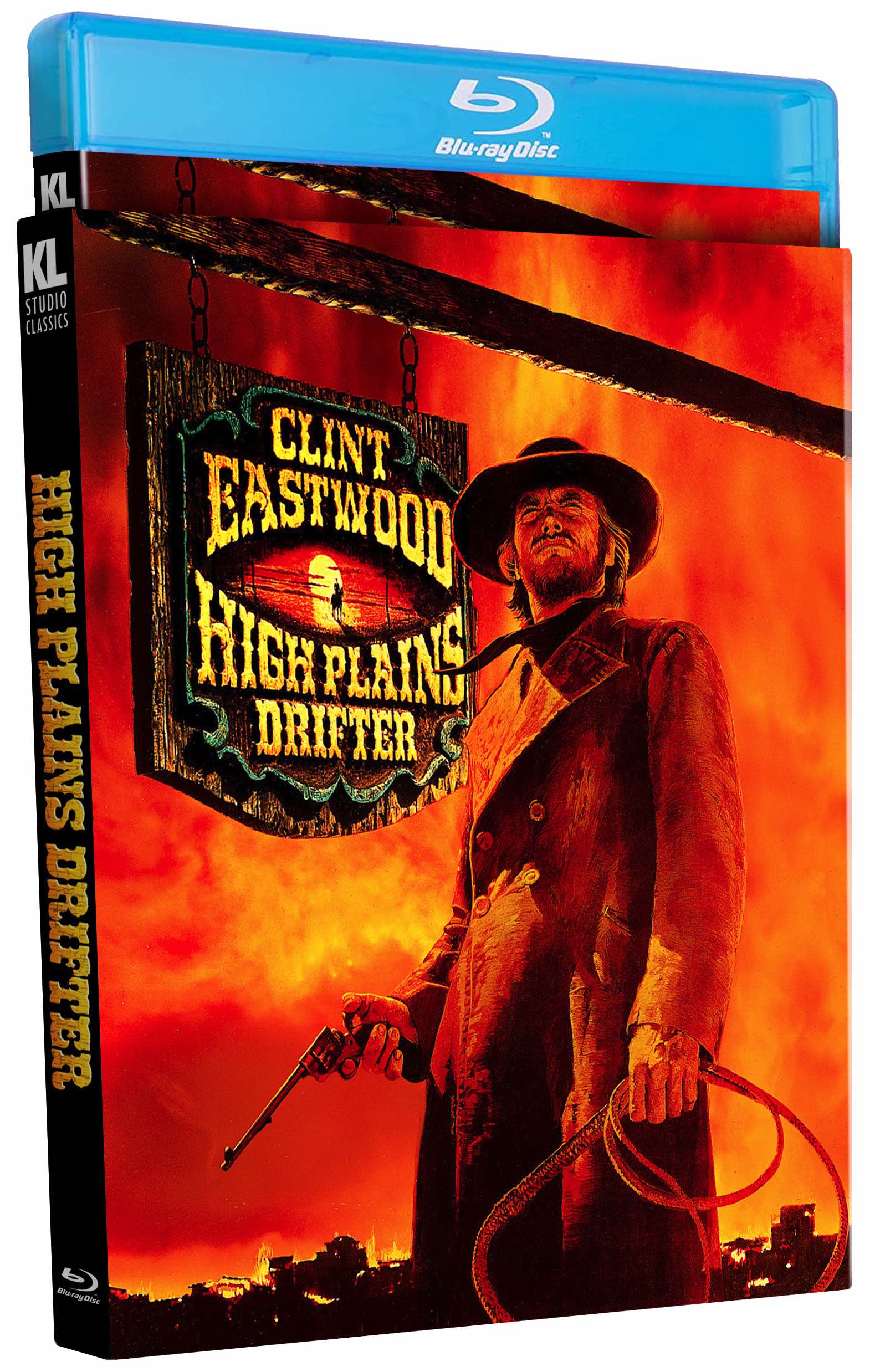 Clint Eastwood’s High Plains Drifter, his first western as a director, has the sort of elementally simple narrative that propelled Sergio Leone’s A Fistful of Dollars, as well as genre hallmarks such as Fred Zimmerman’s High Noon and George Stevens’s Shane. The story involves that old chestnut in which a mysterious man (Eastwood) rides into some town and helps its people prepare to do battle with bandits. Yet the bitterness lurking between the cracks of Shane and High Noon has been profoundly amplified here, as the townspeople are venal, greedy cowards who’re regarded by the drifter with a contempt that verges on the biblical. Next to High Plains Drifter, Eastwood’s midcareer masterpiece Unforgiven is sentimental, and hell, this film might even make Akira Kurosawa’s merciless Yojimbo, the wellspring for the modern American western, blush. Yojimbo punctured its Darwinian nihilism with joyous black comedy, while High Plains Drifter is funny in a more dread-inducing key, offering a lingering visit in purgatory while revealing notions of “society” to be a sham.

Early in High Plains Drifter, Eastwood establishes the film’s stark terms with a scene that’s perhaps more shocking now than it was way back in 1973. The drifter rides into the mining town of Lago and is harassed by a trio of toughs who’re used to having the run of things. After casually killing them with the skill and aplomb of Eastwood’s Man With No Name from Leone’s “Dollars” trilogy, the drifter runs into Callie (Marianna Hill), an attractive woman who picks an argument with him seemingly for the attention, which spurs the drifter to drag her into a nearby barn and rape her. The abruptness of this scene is chilling, and, yes, Eastwood maintains a certain macho ambiguity as to whether or not Callie “enjoyed” it as a reprise from coupling with the local beta males, though the action itself is terse, brutal, and unglamorized. Even more unnerving is the townspeople’s indifference to Callie’s violation, though we soon learn they have a habit of allowing atrocity to flower for their own convenience.

It’s hard to imagine any star now who’d be as willing to confront the disturbing implications of their “image” as strenuously as Eastwood does in High Plains Drifter, which elaborates on the eroticized heartlessness that he previously mined in Don Siegel’s The Beguiled. The drifter’s callousness is never soft-soaped, as this character suggests the apotheosis of the resentment that drives various Eastwood heroes who are constantly tasked with saving people who can’t stick up for themselves and—worse—have no gratitude for the services provided.

In scene after scene, the drifter degrades and exploits a town with a history of ceding power to maniacs, and Eastwood, at the height of his on-screen magnetism, uncomfortably makes room for us to enjoy these humiliations. We respond to his iconic authority, envisioning perhaps that we would be “him” in such a scenario, even if most of us would be among the lambs. Which is to say that High Plains Drifter honors and explodes the sicko pleasure of the vigilante film, which allows us to pretend that we’re the alpha and thusly indulge the alpha’s sense of superiority over what are, ironically, more accurate representations of ourselves. The film could be a libertarian’s dream, which is fascinating given Eastwood’s own conservative politics.

Yet Eastwood’s politics have rarely gone unchallenged in his films. High Plains Drifter periodically enjoys a superhuman loner’s power, which is expressed via bold imagery that evokes Leone’s aesthetic, only with a tinge of gothic neuroses. Yet this film also rues this community’s weakness as a perversion of democratic ideals. The drifter is an avenging angel, perhaps literally, who treats oppressed people such as Native Americans honorably, and who’s haunted by flashbacks of a marshal being beaten to death by a trio of outlaws with bullwhips.

This is among the most disturbing sequences of Eastwood’s career, as the town’s citizens watch the murder with paralyzed awe while shrouded in darkness as the whips crack into the air like gun blasts. One is primed to consider the legend of the dozens of people who watched Kitty Genovese as she was raped and murdered in New York City in 1964, an incident that has inspired many works, such as Harlan Ellison’s short story “The Whimpering of Whipped Dogs.” We are led to wonder, especially by the film’s final image, if the drifter is this marshal returned to even the ledgers—a suggestion that’s intensified by a perverse meta twist: The marshal is played by Buddy Van Horn, one of Eastwood’s most famous stunt doubles.

The film’s horror element is teasingly evocative, emphasized mostly via the sheen of Bruce Surtees’s otherworldly cinematography. Lago is positioned along and often above a large body of water that reflects the sky, subtly proffering the illusion that the town itself is in the clouds, a notion of heavenly paradise that the drifter destroys when he assumes control and orders the townspeople to paint every building a deep, dark red. This red town cuts to the truth of the lonely brutality of western settlement in general, and could’ve sprung out one of Roger Corman’s most surreal productions, particularly The Masque of the Red Death.

When the gang that killed the marshal returns to find this hellscape, its members are brutally dispatched before the drifter rides off into a desert that shimmers with primordial, hallucinatory heat. Unforgiven was said to challenge various valedictory motifs of the western and the revenge narrative, but it essentially allows us to like Eastwood’s character and to feel that delayed closure and justice have been achieved. High Plains Drifter is a more bitter brew, suggesting that violence begets violence indiscriminately, due to authority that’s derived from the acquiescence of populations who’d rather be comfortable than righteous.

The image here can be a bit murky and soft on occasion, especially in interior shots, which is admittedly at least partially in keeping with the film’s aesthetic. Colors are terrific though—with the infernal reds, aquatic blues, and hot whites especially standing out—while the exteriors and facial and fabric details are sharp, with appealing levels of grain. Meanwhile, the 2.0 Master Audio track is rich and very nuanced, lending particular, disturbing body and vitality to the violent scenes, though the small sounds are also pristinely rendered.

In his audio commentary, filmmaker and writer Alex Cox astutely observes the various similarities and differences between High Plains Drifter and the films of Italian maestros like Sergio Leone and Sergio Corbucci. Cox also celebrates the film’s superb sense of location, as High Plains Drifter is set in a western town that was built out of scratch, including functional interiors in many of the buildings. Instead of cutting from a picturesque location to an obvious set, Clint Eastwood and cinematographer Bruce Surtees frequently capture interiors and exteriors simultaneously, tightening claustrophobia as well as our impression of “knowing” this town.

Mining his own filmmaking experience, Cox also talks of scenes he might’ve snipped or of the interior images he finds to be underlit, despite his obvious reverence for the film. In general, this is an enjoyable commentary, which allows room for many cross-references to Eastwood’s blossoming stock company. In new interviews, actors Marianna Hill, Mitchell Ryan, and William O’Connell speak of their various experiences working with Eastwood, all describing him as an erudite and unpretentious artist who trusts his actors and keeps them on their toes with his famous preference for single takes. An archive promo and trailers for other vintage Eastwood productions round out a slim yet engaging supplements package.