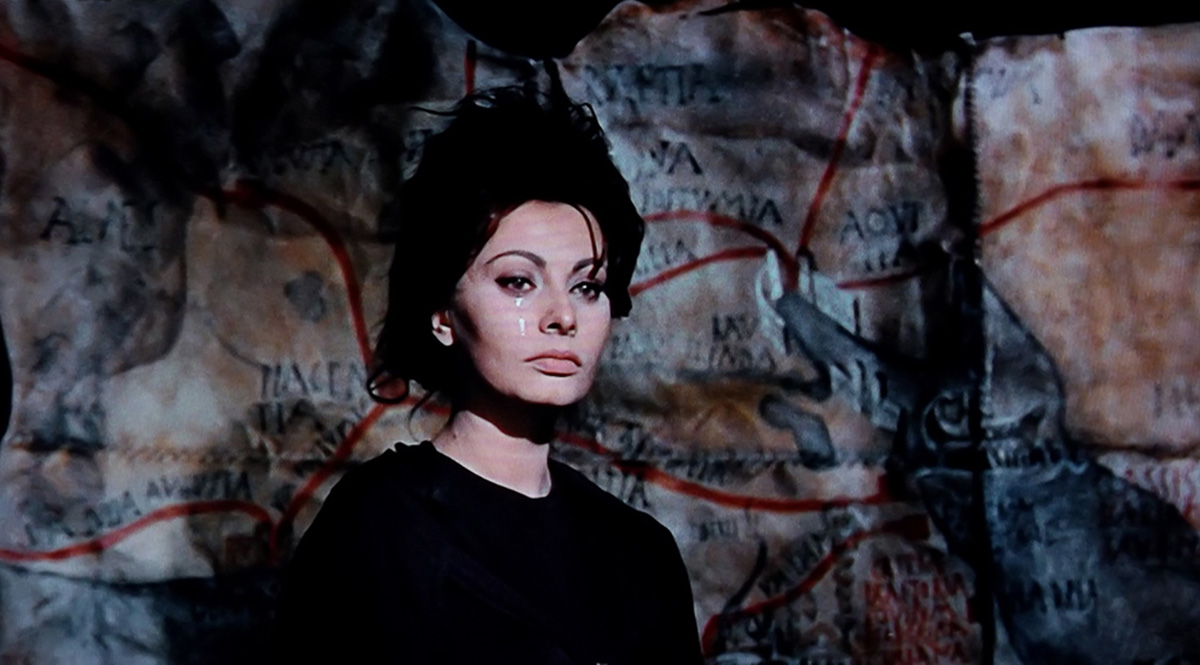 Tough, lean and spare, The Fall of the Roman Empire (1964) was an epic swords and sandals picture coming fast on the heels of Ben-Hur and Cleopatra. Yet despite having its own careening version of a chariot race and the requisite legions of ornately costumed extras amidst spectacularly palatial locations, the tone is surprisingly somber. Much of the first half takes place in the dead of winter, and the performances seem pensive and cool, or manic and edgy. Anthony Mann, best known for his noirish westerns, suggests death through the autumnal season, the Roman legions marching through snowy fields and shadowy pine groves, and the candles and torches flickering ominously in dark rooms.

The oppressive mood gives depth and shading to the pomp and circumstance of ancient Rome, and an extended and potentially tiresome scene where the emperor (Alec Guinness) greets emissaries from every corner of his empire, each with different colorful flags, armor, and titles of honor, is tempered by the fact that the king of the world has a lingering pain in his lower abdomen (a close-up of the emperor’s trusted Greek adviser, Timonides (James Mason), has a gnawing, sweaty intensity, as if he is already imagining his master’s demise). Layers of snow or smoke drift over the widescreen images, obliterating any sense of David Lean’s epic cinema, and the score by Dimitri Tiomkin is frequently low-key. In many scenes, there is no score at all, but the uneasy absence of music in favor of wind or rustling leaves.

The plot in many ways resembles Gladiator, with a heroic tribune, Livius (Stephen Boyd)—fresh from his victories during the German war—selected by his beloved emperor to succeed him. Disgusted with jealousy, the emperor’s son, Commodus (Christopher Plummer), falls into a kind of narcissistic death wish, wanting to plunge himself into suicidal battle against the barbarians. Senators and philosophers conspire to wipe out the already ill, rapidly fading emperor and plant Commodus on the throne. The hero and villain are surprisingly passive here, with instincts driving them to introspective dread or inward rage, and the story is driven not by generals and fighters, but by crafty thinkers—like Mel Ferrer as a blind political leader who smilingly volunteers to present the emperor with a poisoned apple.

There are battle scenes that don’t climax with victory cheers; before the moment of jubilation can occur, a general will turn and scold the handful of gladiators that behaved like cowards, quickly followed by a scene where he is casually pushing them off a bridge as punishment. If there is any levity to be found in the proceedings, it’s from the evil, self-centered Commodus. It’s an eccentric performance by Plummer, which dominates the film. He easily steals the show from Boyd’s wooden hero and the gorgeous Sophia Loren, who summons up sex appeal but little more as the love interest. From the moment Commodus appears, he seems loose, jangling around in his armor with hands flapping back and forth, and grinning so much it seems like he’s trying to hide the fact that he’s emotionally constipated and strangely dissatisfied.

Plummer twinkles with glee, clapping his hands and happily soaking up attention, and his charisma is so strong that he often gets his fellow actors to laugh with him. But it’s also because he’s just so weird. When he wears the golden laurel leafs on his head, they’re slightly crooked, and his monologues don’t follow the rhythm-and-flow of classically trained actors—his words pour out with stop-and-start cadences and are punctuated with nervy smiles. While The Sound of Music made Plummer a star, one sees this early performance and can imagine a career mirroring that of Christopher Walken (or maybe more like that of his daughter, Amanda Plummer). When Commodus says of his potential enemies, “I will destroy them,” it’s almost cheekily flippant, like a child knocking over castles in his sandbox. He’s offbeat, not in lockstep with the beautifully formal images and senatorial tone, and Mann seems very aware of the freaky energy he brings.

It would have been a different movie if Kirk Douglas or Charlton Heston played Boyd’s Livius (Heston by this point had enough of wearing a toga, and had just played El Cid for Mann only three years earlier), but I wonder if it would have been any better. Heston or Douglas, dominant alpha males, wouldn’t hesitate to seize the day, but Boyd is oddly deferential to Plummer. He’s less of a hero, and the movie doesn’t spark during his quiet romantic scenes with Loren. But this leaden quality adds to the mummified tone of the picture. At the midway point, when the sky turns bright blue, the costumes grow more colorful, and the villain achieves his goals, the tone is warmer and the orchestra more expressive and jubilant. That touch of irony makes The Fall of the Roman Empire feel modern, perhaps even more so than Gladiator, which is traditional, even conservative, in its values of family and self-reliance.

Gladiator actually has a very similar conclusion in terms of events, but the tone is quite different here, because even through Commodus is by this point a teeth-gnashing maniac (torching villages and staging crucifixions), his fate is tied to an empire ripe with potential. With his fall, the house of cards is doomed to collapse. The drawn out gladiatorial combat is surprisingly charged, not only because of its dynamic physicality, but also its surprising emotional depth. Again, even if the fight results in victory for the righteous, the implication of the film is that all fighting ultimately leads to a great failure. In most films, might makes right, without regard to the wisdom of diplomacy. Perhaps The Fall of the Roman Empire failed at the box office because that’s not the nature of the American spirit, where we want our good guys to punch out the bad guys, save the girl, and preserve the status quo. What it does sustain is a moral victory of sorts, suggesting we search our sense of compassion before we act.

The Weinstein Company makes a big deal out of their limited collector’s edition gift of The Fall of the Roman Empire, having had some measure of success with their DVD release of the Charlton Heston/Anthony Mann epic El Cid. It is presented in the scope aspect ratio (anamorphic 2.35:1), and the print is restored in such a pristine manner the movie looks like it could’ve been made yesterday (except for some of the hokey dialogue, which is more earnest than today’s disaffected hokey dialogue). Likewise, audio quality is excellent and clear. The film-length commentary track features producer Samuel Bronston’s son Bill and his biographer Mel Martin, and they speak at great length about the heroism, social awareness, financial savvy, genius craftsmanship and, in general, all-around brilliant skills of Bronston, almost at the expense of discussing Anthony Mann, Sophia Loren, James Mason, and the rest of the talent. When they praise the cast and crew, it’s part of their complimenting the producer for assembling such a team. Even when discussing Alec Guinness, who scoffed at the tedious script, they say that George Lucas was surely inspired by this film when casting for Obi-Wan Kenobi in Star Wars.

On disc two, a 30-minute making of documentary rehashes some stories from the commentary, but at least the scope is expanded beyond the greatness of Bronston. The creative decisions behind the film, such as the strange casting choice of Stephen Boyd, are handled with colorful anecdotes (as it turns out, Boyd fit into all of the costumes). Also, several historians touch on some of the cuts made to the movie, trimming down its already mammoth length of three hours plus. Some character moments were lost and a few scenes play as slightly obscure, though it also accounts for the brisk pace of the finished film. Some of the other documentaries are rush jobs: one is a 10-minute look at the historical fall of the Roman Empire, while another, touching on Hollywood revisionism versus historical accuracy, is more of a primer on old fashioned Hollywood screenwriting. As usual, the writers get screwed, and this potentially interesting doc is over before it’s even begun. The 20-minute featurette about composer Dmitri Tiomkin gets into the “ugly, guttural, forceful” sounds that the composer went for, going for “suffocation” instead of a traditional, lush and romantic sound, with individual themes for each hero.

On disc three is a collection of historic films about Ancient Rome, all of which were shot on the state-of-the-art sets of The Fall of the Roman Empire. It’s funny to learn that the minds behind Encyclopedia Brittanica were every bit as much a bunch of hustlers as the Hollywood producers they were dealing with. In exchange for saying that the historical accuracy of this feature film was endorsed by the encyclopedia, they got to use sets and costumes for their classroom films. The films themselves are as mundane and sleep-inducing as what you might remember from History 101.