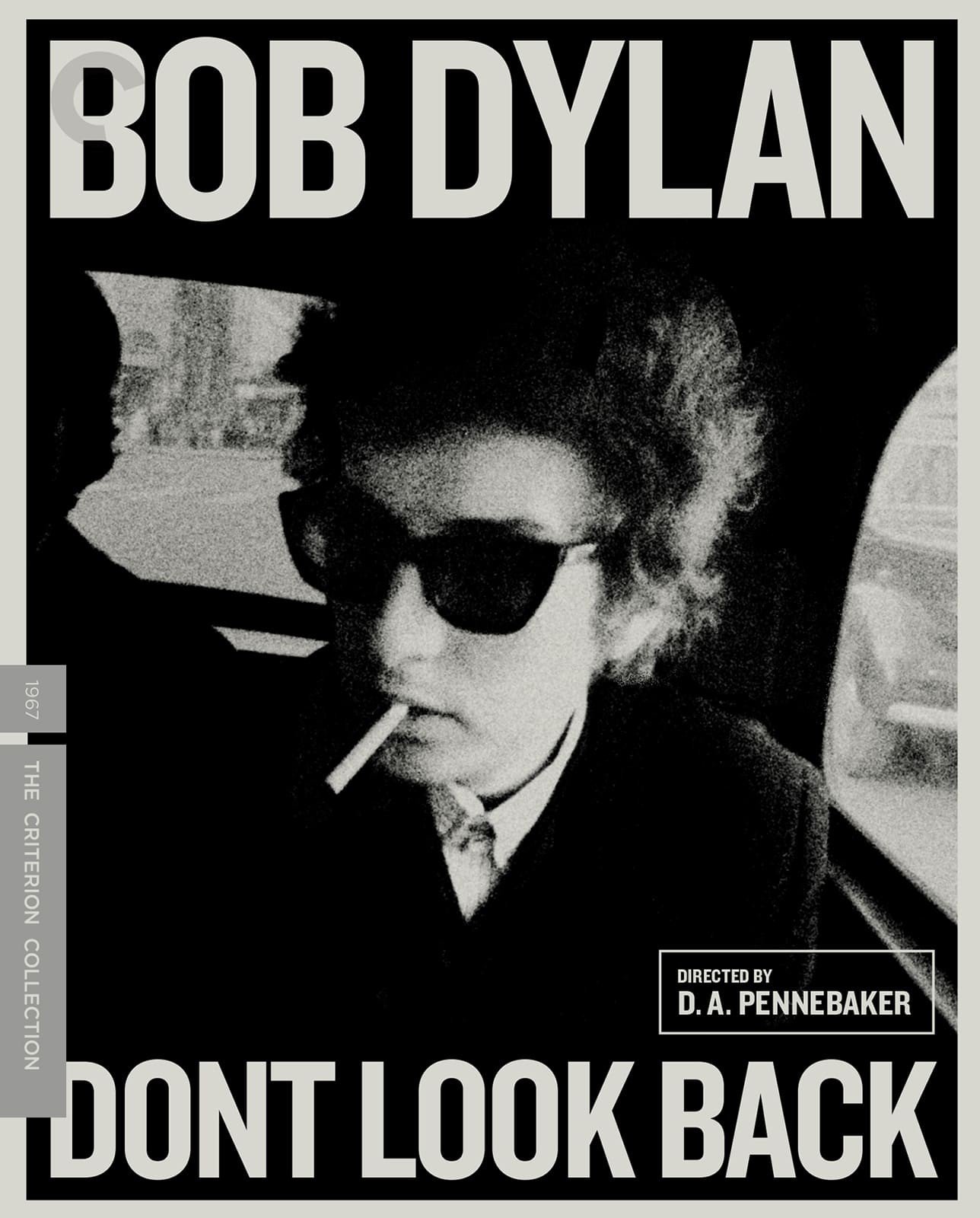 In an age when Bob Dylan occasionally comes down to earth to lend gravelly gravitas to a Chrysler commercial or to half-heartedly spoof his own tactful reserve in an IBM spot, it’s possible to forget that he was once the most enigmatic iconoclast in the musical world, his slippery identity impervious to both the prying inquiries of the press as well as the more innocuous curiosities of his fan base. But even 48 years after its release, and well into Dylan’s current phase of relative transparency, D.A. Pennebaker’s Dont Look Back retains something of a forbidden quality, a feeling that we shouldn’t be privy to the things it shows us. Granted, it’s precisely this intimate access that the behind-the-scenes documentary theoretically sells, but long before this particular kind of film congealed into a recognized genre, not to mention before label operations micromanaged artists to such an extent that anything approaching an “unfiltered” exchange between documentarian and celebrity was a logistical impossibility, Pennebaker was stealing private moments that the entire world was salivating for, but had no reasonable right to witnessing.

To make a zeitgeist-appropriate comparison, imagine if Justin Bieber’s Believe featured an extended single-camera take of the pop star (a comparably sized, albeit entirely different, icon than Dylan in his heyday) relentlessly berating someone in his dressing room for something they may or may not be responsible for, then dropping the issue and starting a jam session, all while pacing back and forth and chain-smoking. Such behavior—at once counterintuitive, unpleasant, and childlike—can’t be packaged for mass consumption because it can’t be easily readable as fulfilling any particular brand agenda, but it’s all that Dont Look Back contains. In its more discordant passages, the film exposes the idea that perhaps the intimate access so longed for by inquisitive audiences isn’t something to be desired, that in peering behind an artist’s hip public image one is bound to find just a human underneath, at which point the aura has partly diminished.

The production’s direct-cinema ethos and lack of binding agreements regarding the parameters of Pennebaker’s access all but guaranteed an unkempt vision of Dylan. Equipped with a portable 16mm camera jerry-rigged for the purposes of this film from composite parts of other cameras, the director’s methodology was simple: Be present and don’t miss a beat. Backstage hangouts, on-stage performances, interviews in nondescript lobbies, taxi shuttles between venues, and hotel-room retreats are all subject to the active surveillance of Pennebaker’s recording equipment, with the filmmaker’s presence made especially palpable by the audible whirring of his camera’s magazine during quieter moments. Joan Baez, manager Albert Grossman, and keyboardist Alan Price all intermittently command attention, but Pennebaker never lets Dylan stray too far from his field of view.

It’s hard to discern the extent to which the result shows one artist knowingly performing for another, but if Dont Look Back is indeed a calculated attempt on Dylan’s part to project a self-image, it’s a perverse one. Sure, he can be a sweet peacekeeper, as in a green-room kumbaya that finds him cheering on fellow folk singer Donovan even as it’s clear he’s unimpressed. Other times he indulges a boyish silliness that’s endearing, as in a moment when he deflects the loving attention of some cute British fangirls with the kind of bashful humility that any guy who’s ever been on the receiving end of overt flirtation will recognize. But more frequently he comes across as pompous, his every response to probing (usually a rhetorical head-scratcher that rephrases the question as a riddle) a passive-aggressive invitation for further combative prompting. Justified as this may be in the face of a presumptuous philistine with nothing interesting to say, it’s downright rude when Dylan essentially belittles the entire raison d’être of a weak-kneed Time reporter’s existence.

This scene comes closest to bringing Dont Look Back to a boil (Pennebaker uses his longest focal length to zero in on the journalist from afar, as if anticipating a snap at any moment), but the film otherwise coasts at a low temperature, its series of observational longueurs cultivating a diurnal repetitiveness that downplays even the performances of such hits as “The Times They Are A’Changin.’” If anything, the film’s energy derives less often from Dylan than from Pennebaker’s camerawork—darting left and right, zooming wherever necessary, at one point even improvising an unorthodox shot/reverse-shot pattern with the help of a mirror.

During Dylan’s low-key moments, this visual hyperactivity can seem rather superfluous, which has the effect of making Pennebaker himself come across as a fanboy, giddy at the mere idea of being holed away in a room with so many black leather jackets, dangling cigarettes, and Ray Bans. (Look no further than Dont Look Back, by the way, for a place to lay blame for decades of homogenously dressed indie rockers.) But even with its director’s occasional crudeness of touch, the film is unmistakably iconic stuff—a thorny document that simultaneously immortalizes and obfuscates its subject, which is about as appropriate a contradiction as one could imagine for Dylan’s music.

D.A. Pennebaker’s film is basically the gold standard for a certain monochromatic, late-’60s grit that’s become the template look for all kinds of tossed-off rock-n’-roll promotional imagery in the intervening decades (take the cover of Beck’s Modern Guilt, for instance, which pays tribute even to the film’s austere all-caps sans-serif). It’s to Criterion’s credit, then, that they haven’t glossed it up to match modern appropriations; the image transfer here is appropriately erratic, by turns soft, sharp, too dark, and too bright. Most importantly, it’s consistently beautiful, true to the fluctuations of a negative exposed in dimly lit rooms and subjected to fierce shifts in focal length and aperture. The same is true of the soundtrack, which preserves initial imperfections (analog hiss, cracks and pops, and sweeping shifts in volume dynamics) while also elevating overall fidelity to modern standards.

Even within Criterion’s prodigious tradition, the new Dont Look Back Blu-ray stands out as an especially loaded package. Interested in enough never-before-seen footage to constitute an entire alternate version of the film? Curious to gauge Dylan’s personal feelings about Pennebaker’s project? Looking for context of the film’s placement within music history, including everything from the loving testaments of Patti Smith to fond remembrances by Bob Neuwirth regarding the era’s revolutionary sounds? All is here, in addition to a handful of supplements that further illuminate Pennebaker’s early filmmaker career. Dylan’s cultural significance surely must have played a key factor in the utter volume and variety of content, but nothing feels like mere fan service. It’s all intended to prolong the film’s spell, which is as rooted in Dylan himself as it is in the otherworldly fascination he was able to exert on others.

Bob Dylan aficionados and casual listeners alike ought not to look any further for a more comprehensive immersion into this phase of the musician’s career.