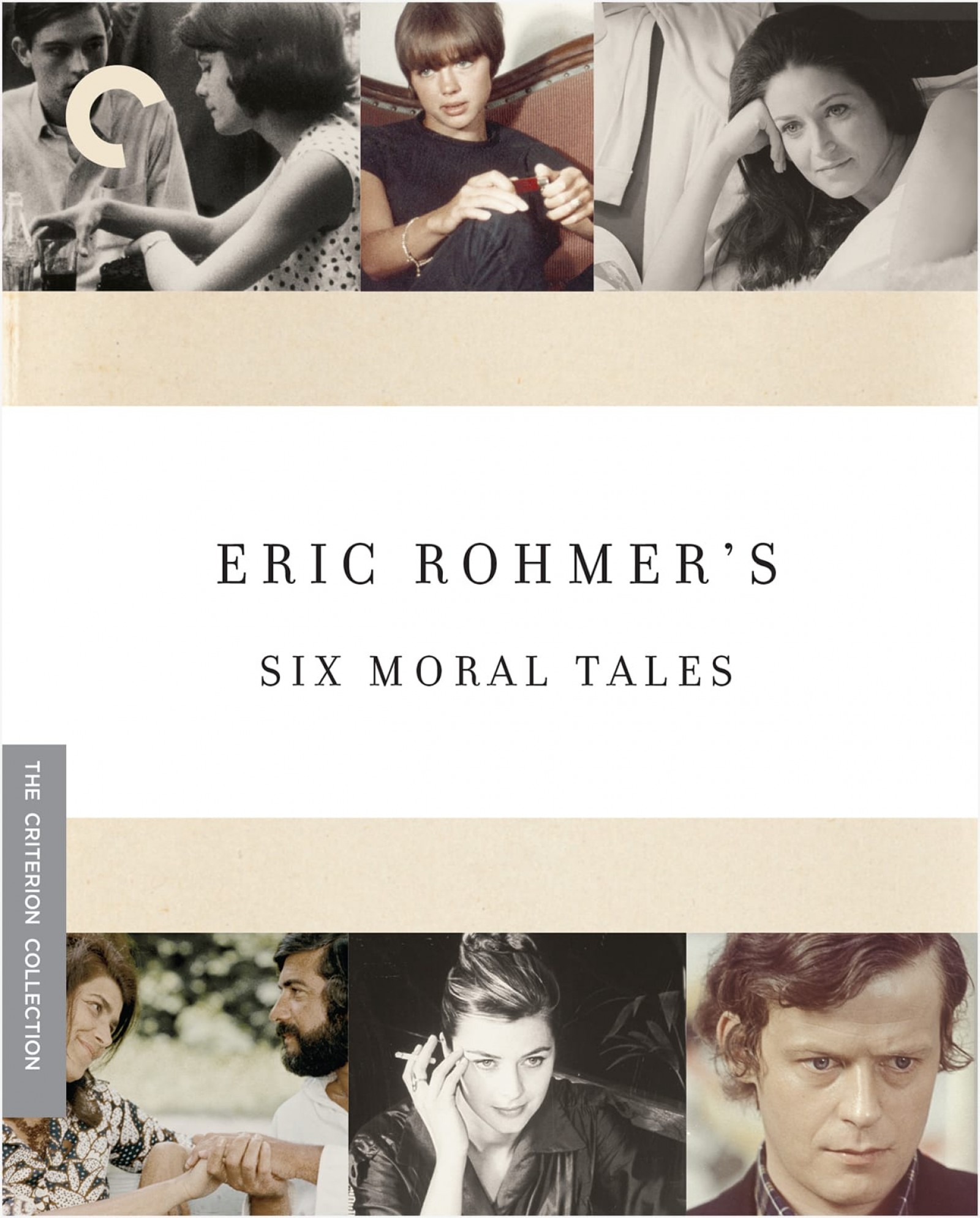 It’s a mistake to privilege any one of Eric Rohmer’s “Six Moral Tales” over another, though the temptation exists and is easily indulged, especially if one takes the disparate, yet complementary, viewpoints of this inimitable set of films as entirely representative of its creator’s own personal principles. Strange that auteurism should fail us so completely in the case of one of its founding practitioners, but Rohmer was always an odd man out among his contemporaries, if not in the remove of years (he was a decade older than most of his Nouvelle Vague brethren), then in the deceptive placidity of his art. His revolutions, in other words, were quiet ones, couched in a perpetual remove and observation.

Rohmer’s greatest popular success, 1969’s My Night at Maud’s, is frequently misremembered as a nonstop talkfest, as it begins with extended passages of an unnamed Catholic engineer (Jean-Louis Trintignant) silently trailing a woman (Marie-Christine Barrault) who will, by film’s end, become his wife. The devoted Catholic’s brief flirtation with the fetching divorcée Maud (Francoise Fabian) brings about his ultimate “moral” choice, a fascinating psychological mishmash of Catholic liturgy, Pascalian hypothesis, and Hitchcockian blonde/brunette dichotomy that’s all too often mistaken—at least in the West—for Rohmer’s own worldview.

At the heart of this misreading is the word “moral” itself, which is typically defined in collective terms: the conscientious needs of the society at large trumping the various bodies that make it up. These films are more concerned with individual moral codes and how they play off of each other within a given situation, and though the films share a basic narrative structure (a man in love with one woman is tempted by a second, only to return to the first), it’s the specific milieu and, resultantly, the characters who inhabit that space which determine the ultimate outcome. Rohmer puts his trust—his faith—in a sense of place: The bustling Parisian side streets of The Bakery Girl of Monceau and Suzanne’s Career beget the stark Catholic trappings of My Night at Maud’s, which lead to the dandified color palette of La Collectionneuse, the deceivingly nostalgic summertime glow of Claire’s Knee, and the theremin-scored, post-1960s fatigue of Love in the Afternoon.

Even if Rohmer’s characters hew primarily to the middle class, his gaze (complemented, in many of these works, by cinematographer extraordinaire Néstor Almendros) is all-inclusive. Witness Claire’s Knee, in which Rohmer relates a battle of generational wits with a complexity akin to Marcel Proust. The respective narrators of these tales—in this case Jean-Claude Brialy’s middle-aged writer Jérôme—always have their manipulations and powers called into question, though Rohmer, for a good stretch of this fifth film in the cycle, seems to privilege Jérôme’s intellectual lecherousness. His pursuit of both the headstrong Laura (Béatrice Romand) and the unwitting, vulnerable Claire (Laurence de Monaghan) extend from sublimated longings, specifically for his friend, fellow writer, and unconsummated love, Aurora (Aurora Cornu). That Aurora effectively masterminds the connections between Jérôme and his objects of desire shows that no one is completely innocent in Rohmer’s world, though such shades of character never come across as the finger-wagging judgments of a pseudo-aesthete.

The cruelty of Rohmer’s characters is casual: Jérôme gets what he wants by effectively destroying Claire’s youthful naïveté, using her cheating boyfriend, Gilles (Gérard Falconetti), against her to contrive a naked emotional moment in which he comforts her by caressing her knee. If this was all there was to Rohmer’s vision it would be limited and unenlightening; Claire would remain a cautionary symbol and little more. But an epilogue shows Rohmer’s true intent. Jérôme is allowed his illusions (by revealing Gilles’s wandering lusts, he’s helped Claire to see the “true” way of things) and so leaves with his desires satiated. Aurora then spies an exchange between Claire and Gilles in which the former’s accusations of infidelity are quickly put aside, and not just because of Gilles’s charms. Jérôme, therefore, has failed, but he’ll never know. The intuitiveness of the image (revelatory, as so many of Rohmer’s films are, of the many mysteries of human nature) is balanced by a concomitant sense of hope, and the moral—if there’s one to be had—is left for us to discover and then to, potentially, express for ourselves.

Criterion’s original 2006 DVD release of Eric Rohmer’s “Six Moral Tales” received a good deal of flack for the studio’s choice of pictureboxing—a process that, while it retained the original 4:3 aspect ratio of the six films, left black bars not only to the sides of the image, but above and below as well. Fortunately, this re-release does away with that problem entirely, keeping the correct aspect ratio while maximizing the size of the picture on the screen. Additionally, all of the films have been transferred from new 2K restorations that offer a sharper image. The uptick in visible detail is especially striking throughout My Night at Maud’s, most notably in the interiors of Maud’s apartment and the snow-swept exterior shots of Clermont-Ferrand and its surrounding mountainous region. Rohmer’s two early 16mm films retain a healthy amount of grain even as they gain in clarity, and while the transfers for three color films lean a bit too heavily toward the teal end of the spectrum, the colors are otherwise nicely balanced, with naturalistic hues extending to everything from the skin tones to the greens of trees and grass. The audio, which consists of linear PCM mono tracks, is also consistently clean, both in terms of the dialogue and the ambient background sounds of the film’s environment.

Criterion has ported over all the supplemental materials from their earlier release. While new extras would have been welcome, this was already an impressive slate of features for touching on virtually every aspect of Rohmer’s professional life. In lieu of any commentary tracks, the set features two lengthy interviews with the auteur: a lengthy discussion from 2006 with Barbet Schroeder and a 1977 appearance he made on the Canadian TV show Parlons Cinema. Schroeder, who early in his career worked with Rohmer, gets into how the duo’s production company was created, and draws the typically elusive master out of his shell to discuss his trouble finding funding for his films, criticism of his work, and his collaborations with cinematographer Nestor Almendros. In the latter interview, Rohmer looks back on his early years as an outsider who, like many of his Cahiers du Cinéma compatriots, largely despised the mainstream French cinema of the 1950s and sought to make films without studio funding.

The remaining interviews are far shorter but no less valuable. In a 1969 conversation, acting legend Jean-Louis Trintignant praises Rohmer’s trust in his own writing and takes umbrage with assumptions about the director’s work with actors. In a chat from 1970, actors Jean-Claude Brialy, Béatrice Romand, and Laurence de Monaghan focus primarily on Rohmer’s extreme privacy and need for solitude and freedom, while filmmaker Neil LaBute, in a 2006 afterword, lauds Love in the Afternoon for its “minutiae of experience” and Rohmer’s tendency to never impose his moral judgments upon his characters. But the most enlightening archival extra is a 1965 episode of the educational TV series En Profil dans le Texte directed by Rohmer. Titled “On Pascal,” it finds philosopher Brice Parain and monk and religious scholar Dominique Dubarle discussing the work of Blaise Pascal from both a secular and religious perspective, and in a way that mirrors Rohmer’s own approach in My Night at Maud’s.

The set’s on-disc extras are rounded out with a handful of short films that Rohmer directed over the years—Presentation, or Charlotte and Her Steak (which was shot in 1951 but completed in 1961), 1958’s Véronique and Her Dunce, 1964’s Nadja in Paris, 1966’s A Modern Coed—and one on which he advised, Edwige Shaki’s The Curve from 1999. The package not only comes with a gorgeous bound book that includes all six stories, written by Rohmer, that served as the basis for the films, but also a separate 64-page booklet with essays by Almendros and such esteemed critics as Ginette Vincendeau, Kent Jones, and Molly Haskell. Rohmer’s own 1948 essay “For a Talking Cinema” is tacked on at the end for good measure, just in case one is left with any doubt of the legitimacy of his garrulous approach to cinema.

Even Blaise Pascal would wager you have everything to lose by not picking up Criterion’s upgrade of Eric Rohmer’s “Six Moral Tales.”