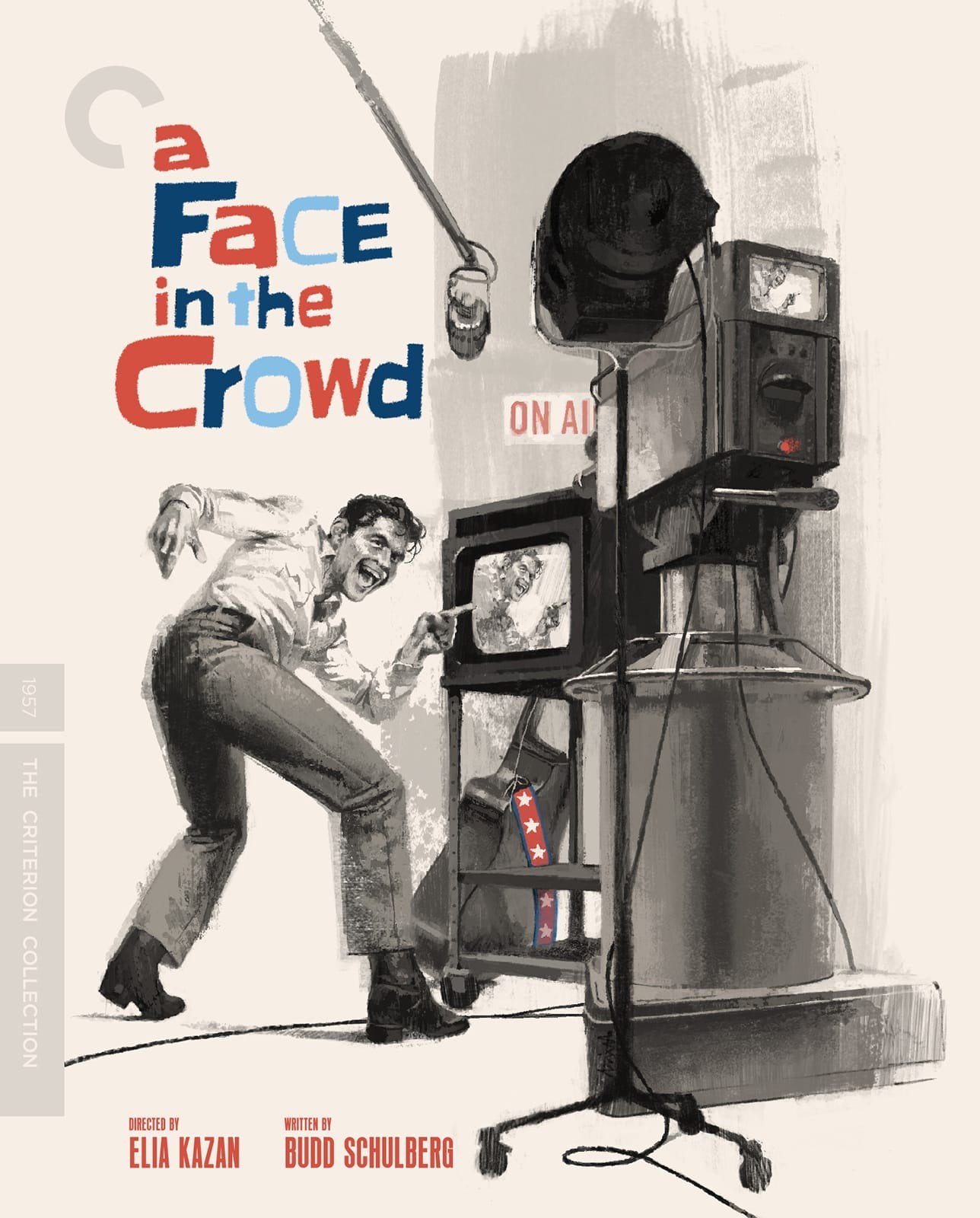 The social problem film, as numerous critics and scholars have termed it, conventionally deals with an issue, ranging from alcoholism to racism, that necessitates citizens to arrive at a collaborative solution. Elia Kazan’s On the Waterfront fits squarely within the subgenre by taking aim at mob-owned union officials who bleed their workers dry. In his initial collaboration with screenwriter Budd Schulberg, Elia Kazan utilized the working-class visage of Marlon Brando’s Terry Malloy to combat corruption. The arrangement of heroes and villains is essentially straightforward, with the longshoremen triumphing in the end over their crooked bosses.

In 1957’s A Face in the Crowd, Kazan and Schulberg’s follow-up vision of societal disarray, no such easy aligning of culprits exist. Released during the rise of television, the film, not unlike John Ford’s The Searchers from the year before, questions the longevity of previously foundational cultural myths—a tack that would come to define the ethos of New Hollywood with the release of The Graduate and Bonnie and Clyde. However, unlike Ford’s seminal inscription of John Wayne’s character as a racist Confederate whose time has passed, Kazan and Schulberg appear caught between the impulse to dramatize or satirize the rise of demagoguery, creating a sometimes tonally confused, though often lucid, vision of the emergent threats to American democracy.

A Face in the Crowd confronts how TV is used by network execs and politicians to manipulate a working-class electorate into bending to the will of power. These gullible citizens believe they’re supporting one of their own, so to speak, in Lonesome Rhodes (Andy Griffith), an Arkansan drifter who transforms himself into something of a demagogic Svengali. Lonesome finds himself in a position of influence thanks to radio producer Marcia Jeffries (Patricia Neal), who hosts the program of the film’s title. She both finds the man and, seeing his potential to connect with audiences, gives him a platform to express himself.

The film initially considers Jeffries’s intentions with the same devoted interest as it does Rhodes’s meteoric rise up the ranks of political power. An early example is evident during the opening sequence, in which Jeffries enters an Arkansas jail and declares: “People are fascinating wherever you find them.” Such a nakedly ethnographic proclamation demonstrates how a statement of empathy often covers for the baser interests of exploitation. Indeed, Jeffries wants to leverage her relationship to everyone she meets for personal gain. As the film progresses, however, its focus shifts toward a simplistic takedown of Rhodes’s egomaniacal persona and away from the industry that allowed him such distinction in the first place.

A Face in the Crowd uses the ever-evolving relationship between Jeffries and Rhodes, who go from business partners to lovers to foes, as a counterbalance to how it envisions the American political process as being predicated on manipulation and deceit. Yet the film’s ideas about corruption, which raise a number of complicated questions, are often pushed aside in favor of going after an easier target. As Rhodes ascends to the role of image coach to an aspiring senator, Worthington Fuller (Marshall Neilan), instructing the man, in part, to stop pursing his lips because it makes him look like a “sissy,” A Face in the Crowd stokes its indictment of populism while letting certain faults of liberalism off the hook.

The film’s most intriguing perspective on Jeffries and Rhodes is how the former’s infatuation with the latter is a tangle of professional ambition and sexual feeling; Kazan often places Jeffries in close-up, eyes wide, taking in Rhodes’s face with an ambivalent, though palpable, sense of excitement. When Rhodes exclaims, per one of Schulberg’s several crackerjack, double entendres, that “a guitar beats a woman every time,” the moment foreshadows that Jeffries will become the victim of such misogynist logic. In fact, it’s only after Rhodes has taken a teenage wife in Betty Lou (Lee Remick) that Jeffries suffers a mental breakdown and aims to destroy Rhodes’s career by revealing his fraudulent act.

In the end, the filmmakers only conceive of Rhodes’s appeal in mostly rudimentary terms, as in the cutaways to audiences either nodding in approval or exclaiming their support of him. When Jeffries broadcasts Rhodes, who believes he’s off air, calling his supporters a herd of idiotic sheep, the film settles for the most obvious takedown of the man imaginable. The notion that audiences, who see Rhodes as a savior, could so quickly flip from affectionate to contemptuous feels too easy. Given the uncertainty about television as a platform that runs throughout A Face in the Crowd, the finale’s relegation of Rhodes to lunatic status, left to rant and rave alone in his high-rise penthouse, feels more like wishful thinking on behalf of the filmmakers than a consideration of the potential consequences of celebrity worship.

The image, sourced form a 4K digital transfer, boasts significantly more information than the 2005 DVD release of A Face in the Crowd from Warner Home Video. The climax set in Lonesome’s penthouse makes incredible use of depth of field, and the images are striking for their level of detail. Blacks and whites are well balanced throughout; especially impressive are the outdoor scenes of Lonesome being courted and corrupted by scheming politicians. While grit has been scrubbed from the image, nothing looks overly digitized or compromised by the restoration process. The monaural track is loud and impressive, meaning that each and every one of Lonesome’s guffaws and bellows comes through with necessary force. The dialogue and score are clearly audible throughout, with no signs of pops or hisses on the track.

In a new interview recorded for this release, film historian Ron Briley describes Elia Kazan’s career during the ’50s, with particular attention given to the infamous HUAC hearings during which he named several writers and directors who were affiliated with the communist party. In fact, since both Kazan and screenwriter Budd Schulberg had previously been members of the party, it was their being on the same page about the aftermath of the hearings, according to Briley, that led them to work together on On the Waterfront and A Face in the Crowd. Another new interview presents Andy Griffith biographer Evan Dalton Smith discussing how the actor’s early career contains parallels with that of Lonesome Rhodes, absent the eventual turn into demagoguery. The other two extras have been carried over from the 2005 DVD: a 30-minute documentary, “Facing the Past,” which features cast, crew, and film historians variously explaining the film’s legacy in historical and personal terms, and a theatrical trailer. A booklet contains three separate pieces: an essay by critic April Wolfe, who assesses the film’s prescient vision of media-saturated politics, excerpts from Kazan’s introduction to the film’s published screenplay, and a 1957 New York Times Magazine profile of Griffith.

Whether you find the execution of A Face in the Crowd brilliant or simplistic, Criterion’s excellent Blu-ray transfer will allow this classic of American political critique to remain a topic of debate for years to come.