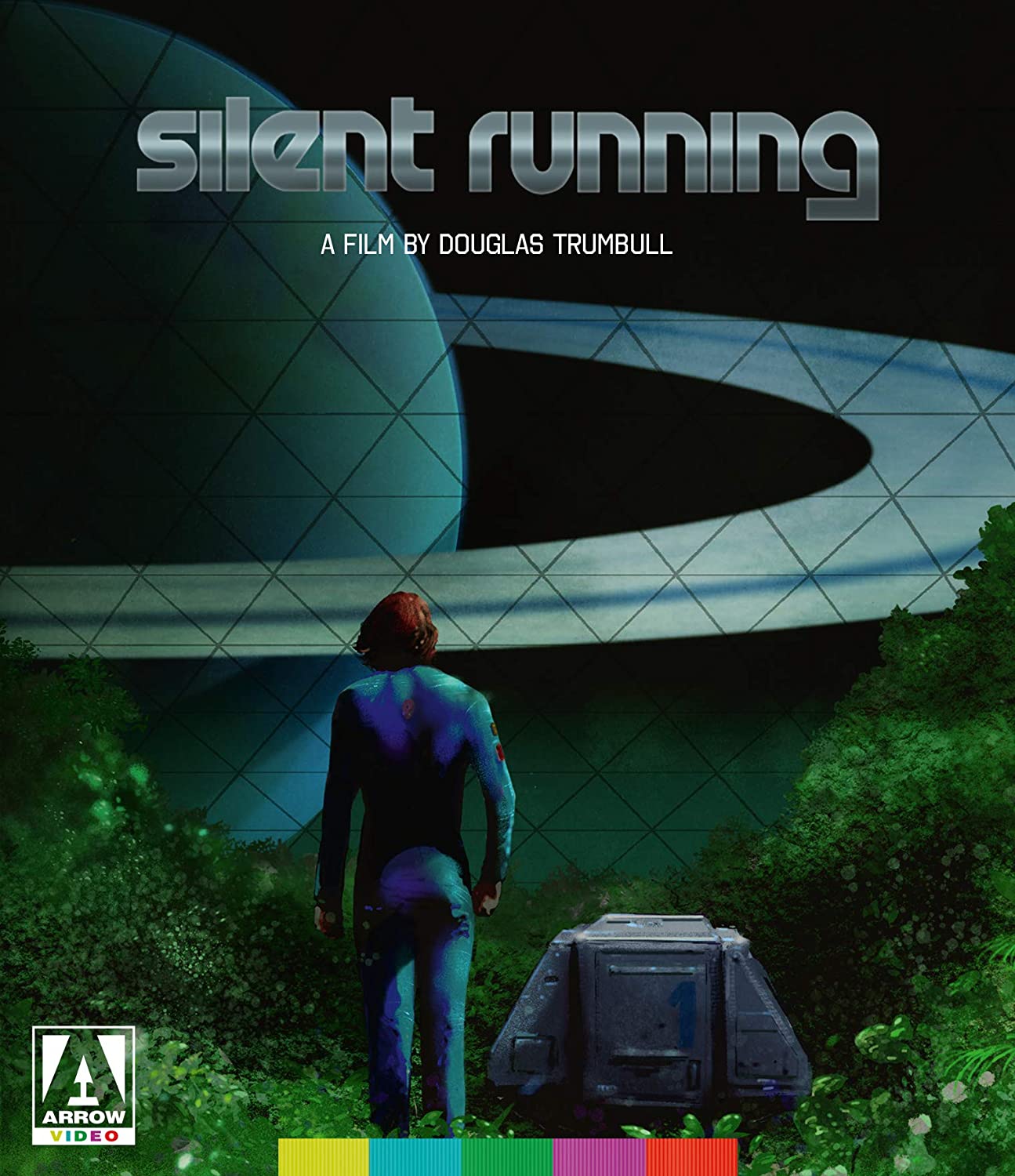 In more ways than one, Douglas Trumbull’s Silent Running is the middle point between Stanley Kubrick’s 2001: A Space Odyssey and George Lucas’s Star Wars. Trumbull worked for Kubrick on the computer display effects and Slitscan technique used for 2001’s mind-blowing finale, and he later declined Lucas’s invitation to work on the effects for the first Star Wars film. But the links run deeper, as Silent Running straddles the line between notions of interior and exterior exploration. 2001 is an almost abstract tone poem about man’s ascendance to some kind of higher plane of consciousness. Silent Running is both a trenchant fable concerning ecology and a melancholy, introspective character study about alienation. Star Wars is essentially an adventure serial all dressed up in sci-fi trappings. Not to mention, the shambling drones that seem to take on a personality of their own in Silent Running pave the way for a certain burbling trash can-shaped character.

Silent Running isn’t terribly concerned with detailed, consistent world building. Suffice it to say that an environmental catastrophe has forced humanity to launch an armada into space carrying various ecological samples, housed in Buckminster Fuller-derived geodesic domes, until they can be brought back to Earth for reforestation. Forget that the plan doesn’t make a whole lot of sense—or that conditions back on Earth seem to have somehow improved in the absence of these oxygen-generating flora—this is the realm of pure fable. Silent Running thus aligns with other early-‘70s environmentally conscious films like Cornel Wilde’s No Blade of Grass and Richard Fleischer’s Soylent Green. It also taps into the counterculture’s interest in conservation as exemplified by the Whole Earth Catalog and the creation of Earth Day in 1970.

Some of Silent Running’s most trenchant satire comes across as almost offhanded. When the crew of the Valley Forge are given the unexpected order to jettison and self-destruct the domes, it’s so the fleet can be returned to “commercial duty” for American Airlines, who actually let their logo be used in the film. The suits evidently didn’t read the script too closely. This callous command serves to underline capitalism’s ruthless pursuit of the bottom line at all costs. Judging from posters glimpsed on the mess room wall, three of the four Valley Forge crew members are eager to return to a world of rock stars, race cars, and football games. They resemble a species of astronomical toxic masculinity. Only the resident botanist with the notable name of Freeman Lowell (Bruce Dern), with his penchant for monk’s robes and choosing fruit over synthetic glop, seems to give a damn.

A more straightforward film would position Lowell as the unreconstructed hero, valiantly taking up the struggle against authoritarianism and the caprice of command. But Silent Running endows its characters with more nuances that help to muddy the moralistic waters. Since he’s played by professional weirdo Bruce Dern, Lowell takes on an obsessive streak that leads him to cold-blooded murder and perhaps even madness. Though the other three Valley Forge crewmembers—John Keenan (Cliff Potts), Marty Barker (Ron Rifkin), and Andy Wolf (Jesse Vint)—are clearly thoughtless assholes, they’re never portrayed as unrepentant villains, just as space jocks looking to finish up their assignment and get home.

Another of Silent Running’s strengths is that it doesn’t limit Dern’s performance to only the one register. There’s genuine pathos in Lowell’s burgeoning relationship with the drones he nicknames Huey, Dewey, and Louie. Racked with guilt over the human contact he himself has actively severed, Lowell begins to anthropomorphize the machines. The film leaves open whether his fiddling with their circuitry leads them to some sort of actual sentience or whether it’s just Lowell’s wishful projection on them. A wry humor even creeps into the scene where he teaches two of the drones how to play poker. Silent Running also leaves entirely open the ultimate effectiveness of Lowell’s quixotic (not to mention self-destructive) endgame. We’ll never know whether his plan for environmental preservation succeeds, or if it simply spins off forever into the vast emptiness of interplanetary space.

Arrow Video presents Silent Running in a new 2K restoration that looks superb, a very definite step above Universal’s earlier Blu-ray release. Colors, those verdant greens and primary hues of the uniforms in particular, are dense and deeply saturated. Clarity and fine detail are excellent, if a bit variable in some of the optical-effects shots. Grain levels are mostly well-resolved, though they can also get a bit thick in those same effects-laden scenes. Audio is available in Master Audio mono, which sounds terrific across the board with dialogue, audio effects, and Peter Schickele’s lush score, complete with two folk songs sung by Joan Baez. There’s also an isolated score and effects track offered in LPCM two-channel mono.

For this release, Arrow ports over a few extras from earlier home-video releases of the film, while also providing a few excellent new ones as well. Among the archival materials is a nearly hour-long making-of documentary that has a lot of good stuff in it, including some priceless footage of the differently abled actors inside those drone costumes. Also of note is a short piece on Douglas Trumbull that catches up with what he’s been doing since Silent Running, most notably his invention of the IMAX-like Showscan film process that helped to usher in similar technology used in Universal Studio’s Back to the Future ride.

There’s also an interview with Bruce Dern in which he discusses his early career playing second fiddle to the likes of John Wayne, being offered the role in Silent Running, and the film’s visual effects and themes. As for the archival commentary track with Dern and Trumbull, it’s an intriguing listen, as they go deep into the film’s origins, production history, and legacy, though some of what they discuss overlaps with the BTS documentary.

The new commentary track by critics Kim Newman and Barry Forshaw is excellent, managing to be both engaging and highly informative. Newman and Forshaw have a lot to say about the sci-fi genre and the film’s place therein, its influences, and its underlying themes and philosophical attitudes. An interview with film music historian Jeff Bond covers composer Peter Schickele’s career both as a film composer and as his alter ego, P.D.Q. Bach, classical music parodist. A visual essay from Joe Spira explores Deric Washburn and Michael Cimino’s original draft of the script and the ways in which it differs from the finished film.