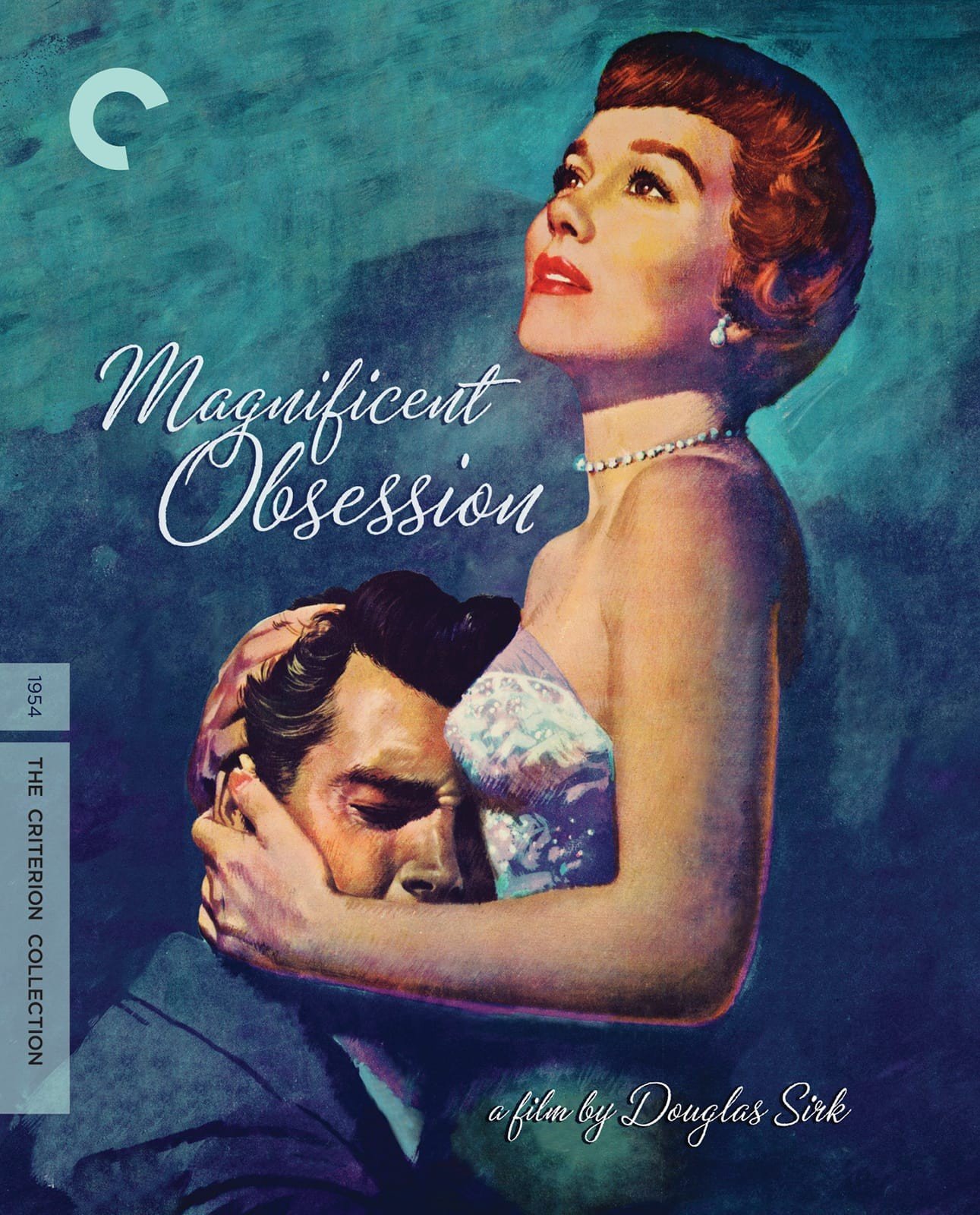 Douglas Sirk’s Magnificent Obsession wasn’t the German expatriate’s first film made in Hollywood, his first collaboration with frothy producer Ross Hunter, or his first dabbling in the genre of melodrama. It isn’t even, by the measure of your average Sirk enthusiast, his first masterpiece. But, in retrospect, it was the decisive turning point in his late career boom, in which he crafted deliriously purplish, deeply jaded women’s weepies that only later became revered for both celebrating and critiquing the excesses of red-blooded, middle-American 1950s entertainment.

And it’s no softball first pitch: Fate, irony, faith, altruism, martinis, speedboats, instantaneous blindness, exotic European clinics, secular Christianity, charitable sexuality, and modernist interior design are all ladled onto novelist Lloyd C. Douglas’s rickety narrative frame without so much as the whisper of a suspicion that the whole enterprise ought to collapse even without the added weight of Sirk’s soon-to-be trademark Brechtian skepticism. In short, Magnificent Obsession is perhaps the first Sirk film to call to mind Stuart Klawans’s memorable description of “film follies,” in the essential book of the same name: “These are movies for people who want to die from too much cinema.”

Of course, Sirk’s ‘50s melodramas are far too rigorous and tightly wound to ever merit comparison to the delightful fiscal irresponsibility of Erich Von Stroheim’s Foolish Wives, Jacques Tati’s Playtime, and David O. Selznick’s Duel in the Sun, even if occasionally his subject matter approached emotional recklessness of a comparable magnitude. Sirk’s specialty during this rarified period was chronicling with a merciless analytical bent (good humor? Bad faith?) the mechanics of American soapers. It’s become a cliché to celebrate Sirk now for his cold, ruthless take on social mores, and to overcompensate for deconstructing not only those behavioral habits, but also how pop culture reflects and feeds them.

What people don’t quite give the filmmaker credit for nowadays in their rush to justify his intellectual credentials is the fact that if he didn’t necessarily believe in the cheesecake he served up, he gave off a damned good impression that he did—which is why Sirk’s reputation endures while many of his contemporaries fall continually in and out of fashion. The proof is in Magnificent Obsession’s goopy pudding. Unlike All That Heaven Allows (with that shot of Jane Wyman trapped inside a TV set that all but writes the dissertation for you), Written on the Wind (the ultimate example of Sirk’s sympathy for society’s devils and contempt for virtue), and Imitation of Life (a film that for 50 years now has mopped the floor with any other attempt to tackle America’s never-to-be-resolved race crisis), Magnificent Obsession is really and truly utter trash. And it’s unapologetically entertaining.

The film opens with a breathless orgasm of proofs to Murphy’s Law. Rock Hudson’s callous playboy, Bob Merrick, after getting into a 180mph boating accident basically because he can afford it, is saved by a special medical device invented by a doctor on the other side of the lake. But this doctor happens to have a heart attack at the very moment his device is saving Hudson’s life, after which Bob spends a long and frosty recuperation at the hospital run by—guess who? It ends with a medical miracle that sees Bob himself attempting a lifesaving operation on that doctor’s widow, Helen Phillips (Wyman), but not before achieving a mystical spiritual rebirth and, just for the ladies, scrubbing down in the longest shirtless surgical prep scene in cinematic history. Somewhere in between those two story points, Bob indirectly causes Helen to go blind, discovers something like a god in the form of a cryptically gay-ish artiste (Otto Kruger), entertains Helen with the help of an adolescent live-action Peppermint Patty (Judy Nugent), and goes a little gray at the temples. Helen, meanwhile, cries.

Sirk takes this plot, already committed to film in workmanlike fashion by John M. Stahl in 1935, and accentuates all the aspects that shouldn’t work: incidental coincidences, irrational decisions, sermons of nebulous denomination. His commitment to the ridiculous is what finesses that trademark Sirkian irony, but it’s not a safe, intelligent irony. One can’t watch the film today in the same way one would All That Heaven Allows, focusing on Sirk’s ahead-of-his-time attack on small-town mentality. Magnificent Obsession is a more mysterious beast, one that doesn’t work without a belief in Sirk’s form. In that sense, it’s the ultimate litmus test. If you pass, you might also come to realize that Bob’s decision to overthrow rationality because the cherub choir swells to a crescendo is the film’s best self-fulfilling metaphor.

When Magnificent Obsession first appeared on Criterion DVD in 2009, the video transfer was solid, if not quite the quantum leap forward from the 2001 DVD edition of All That Heaven Allows. (Frankly, the transfer on the studio’s 2001 DVD version of Written on the Wind was superior.) Now that Criterion’s taken a second crack at Magnificent Obsession, it’s unquestionably the most attractive Criterion release of a Douglas Sirk film on the market. The colors are still not dazzling per se, but they’re appropriately saturated in a way that seems an acceptable truce between melodrama and veracity. In any case, the traces of edge enhancement that plagued specific scenes in the DVD are nowhere to be seen here. So long as you don’t go in expecting a Suspiria-like level of kaleidoscopic colors, it’s downright flawless. The sound mix is uncompressed on the Blu-ray—not that it opens up things much beyond what the DVD accomplished, given 1950s sound technology.

Until such time comes as Criterion finally gets around to their Written on the Wind upgrade, this and All That Heaven Allows remain two parts of a bonus-feature trilogy waiting for the third to arrive. Luckily, there’s still more than enough to keep fans busy. First is an audio commentary by Thomas Doherty that’s probably a little more studied and less revelatory than the film’s tone merits, but overall rich with detail and insight. But for my money, Allison Anders hits the mark a little more squarely in her brief introductory video piece about the film, in which she talks about the shock of seeing Rock Hudson’s silky hospital pajamas. Kathryn Bigelow, on the other hand, comes off as nothing if not self-aggrandizing. On the second disc is a feature-length interview with Sirk shot in the final years of his life; despite the bizarre, Night and Fog-suggestive credits, it’s an essential forum for Sirk’s matter-of-fact assessment of his work in Hollywood. Finally, Criterion includes as an extra feature John M. Stahl’s 1935 version of the film starring Irene Dunne and Robert Taylor. The disc’s liner notes by Geoffrey O’Brien make a lot of nice observations about the film and how it influenced Sirk’s remake, but I imagine most Sirk fans will find it oddly bloodless. (For one thing, this purported melodrama has less incidental music than most Iranian films I’ve seen.)

Magnificent Obsession was a decisive turning point for Douglas Sirk, kicking off a beloved string of loopy ‘50s melodramatic masterpieces.

Blu-ray Review: Marco Bellocchio’s Fists in the Pocket on the Criterion Collection

Blu-ray Review: Spike Lee’s Do the Right Thing on the Criterion Collection