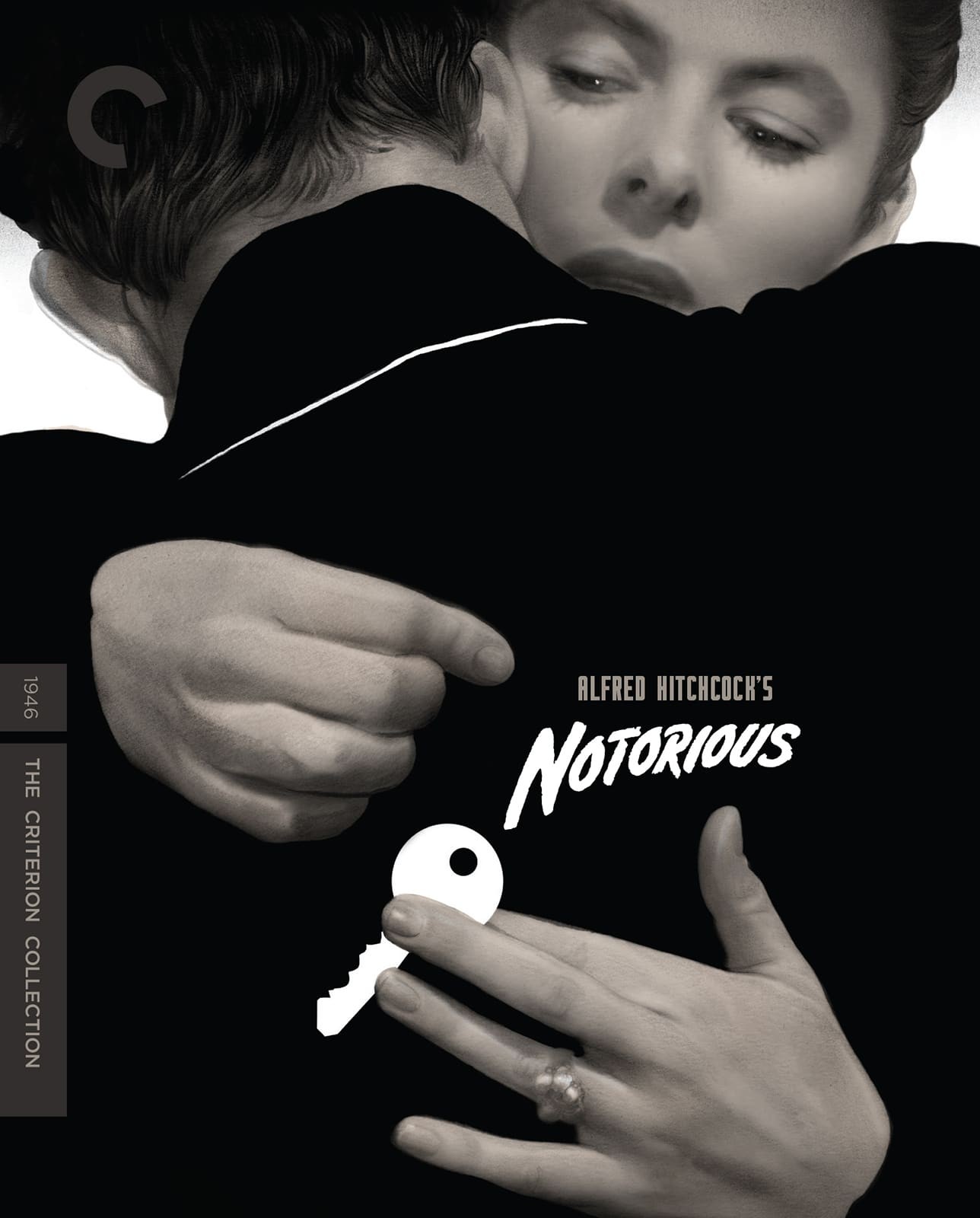 Alfred Hitchcock’s 1946 romantic espionage film Notorious retrospectively suggests an intersection between three major modes of the filmmaker’s popular work. In the ‘30s, Hitchcock directed punchy and macabre comic thrillers that were sprinkled with sexual panic. In the ‘40s, partially under the inspiration of David O. Selznick, Hitchcock’s preoccupations rose to the surface of the narratives, and he developed longer camera movements that emphasized the connections between characters and totems which physicalized their emotions. A heightened version of this aesthetic would lead, in the ‘50s and early ‘60s, to a string of thematically connected masterpieces: Rear Window, Vertigo, Psycho, The Birds, and the insane, viscerally self-cannibalizing Marnie. Notorious has the control and the precision of Hitchcock’s ‘30s films, and the feverish pathos of his late period.

Notorious pivots on a neurotic sexual relationship, governed by an imbalance of power, which anticipates the auto-critical narrative that would drive Vertigo. The wounded and aloof Devlin (Cary Grant) manipulates Alicia Huberman (Ingrid Bergman), a woman with a compromised reputation, known for hard drinking and carousing, into infiltrating a ring of Nazis hiding out in Rio de Janeiro, so that she may report her findings to American intelligence. In this manner, Devlin suggests a film director who coaxes an actress into performing his own fantasies and nightmares. Alicia is attracted to Devlin and available to him, yet he claims to fear women, subjecting her to various tests of loyalty that aren’t only passive-aggressive acts of cruelty, but “auditions” for the role of redeemed and trusted lover. The supreme romantic test is the mission itself: Alicia is to earn the confidence of one of the central Nazi criminals, Alexander Sebastian (Claude Rains), via seduction. Which is to say that Alicia is damned whether she does or doesn’t play by Devlin’s rules, as she must choose between castigation by the American government and puritanical rejection by the man she loves.

Notorious has a casually worn brutality that’s startling even by the standards of modern cinema. The film’s spy games are a heightened metaphor for male jealousy, as Devlin is a spritzed-up version of any man who wonders if his woman is capable of loyalty. Devlin suggests Othello and Iago in one, as Grant’s charm is wedded to Hitchcock’s paranoia. The actor doubles down on the alienation of the role, giving a performance that’s poignant and chilling, bringing to the fore the aggression that’s latent in films like His Girl Friday, while Bergman is discombobulating in a differing fashion, emphasizing Alicia’s self-loathing and vulnerability. This pervading mood of depression and sexualized resentment contrasts with the silky atmospherics and the gorgeousness of the stars, as Notorious is a rarefied tale of pettiness, a sexy and kinky story of being willingly prostituted and cuckolded.

Gender wars have been glamorized by cinema since the medium’s inception, and elements of Notorious will no doubt remind viewers of Hollywood staples like Casablanca. Had Hitchcock only dramatized the power that men and women have over one another, his films would lack their pulse, but he was also a poet of the confusing pleasure of submission. In Vertigo, Stewart’s Scottie takes refuge in the disappearance of his lover, as it allows the former police detective to focus his lifelong loneliness and bitterness on a tangible tragedy that begets another tragedy of his own doing. Though wracked with longing for Alicia, Devlin is understood to get off on sending her to Sebastian’s bedroom, if for nothing else than to realize his worst fears on his own terms. This narrative development, in which nightmares are brought to life and manipulated, is another metaphor for Hitchcock’s filmmaking.

The way that Devlin and Alicia lacerate one another, via screenwriter Ben Hecht’s dialogue, which has the strategic violence of jiu jitsu, is a form of sex that’s divorced of the danger of uncontrolled intimacy. Such verbal sex is familiar of screwball comedies, many written by Hecht, but Hitchcock and his stars ratchet up the pain, which is complicated by another irony: Sebastian pays Alicia the respect and flattery that Devlin is too fearful and prideful to grant her. If one missed the first act of the film, one might assume, for a while at least, that Sebastian is the hero and Devlin the villain. Sebastian is what Devlin suspects himself to be: a patsy, a fool who presumes himself to belong to the stars.

Given the complications of the film’s plot, it’s remarkable that there’s no merely functional exposition. Every fact of the mission is tethered expertly to the triangle between Devlin, Alicia, and Sebastian. No one says what they mean, and so shifting power dynamics are expressed by objects: a key, a wine bottle, a stairway, and a series of poisoned cups of tea. And a twin motif—rhyming Devlin and Sebastian as sexual opposites who each control Alicia—is visualized with an intricate web of images and temporal loops. Sebastian’s off-screen death, which is triggered by Devlin, is implied by his foreboding walk to the front door of his mansion at the end of the film, which echoes Alicia’s earlier entrance into the same hornet’s nest, also arranged by Devlin. A forgotten bottle of champagne, left by Devlin when he discovers what the American government truly expects Alicia to do on her mission, signifies the abbreviation of their blossoming relationship while foreshadowing the nature of Sebastian’s plan. (The rhyming of Devlin and Sebastian is brought into starkest clarity by a heartbreaking sequence set at a race track, in which Alicia must reassure each man separately and consecutively, similarly massaging their insecurities for her own survival.)

Hitchcock’s masterful long takes, honed during the making of the Oscar-winning Rebecca, connect these objects with their surroundings and contextualize them as elements in the subterranean language that exists below the barbs and flattery the characters exchange as defense mechanisms. Notorious is a perfect work of control, yet it also anticipates the madness that would bubble up in Hitchcock’s later and more daring art, as he pushed himself further into the realms of the emotionally uncanny, increasingly linking himself with his tortured and monstrous male protagonists.

There are a few consistency issues with this image: Certain compositions are lightly blurry, especially when characters are in the sunlight, though this may be a deliberate expressionist effect on Alfred Hitchcock’s part. Grit is healthy, though also not entirely consistent from frame to frame. Yet this transfer is generally quite beautiful, sporting a vibrant clarity that serves the film’s many close-ups of the actors’ faces, which are important to a narrative that pivots on various levels of intricate subterfuge. The soundtrack is clean and crisp, with a poetic emphasis on the small diegetic sounds that puncture the vast silences of the film, often caused by characters in the grips of fear and love.

In “Powerful Patterns,” film scholar David Bordwell analyzes the celebrated climax of Notorious, illustrating how Hitchcock gradually prepared for this stand-off throughout the narrative via echoing images, symbols, and motifs. In “Glamour and Tension,” cinematographer John Bailey discusses specific camera movements, including the legendary zoom from a wide shot of a party to a close-up of a key in Alicia’s hand, as well as subtler tracking shots that condense shifts of power into succinct and playful visual stanzas. In “Poisoned Romance,” Donald Spoto, the author of the profound Hitchcock biography The Dark Side of Genius, further elaborates on the structure of the narrative, particularly in terms of closing loops, while summarizing Hitchcock’s working relationship with David O. Selznick, who lent the filmmaker to RKO while preoccupied with the filming of Duel in the Sun.

Collectively, these superb new featurettes offer a master class in Hitchcock’s aesthetic, diving deep into his mastery and obsessiveness, while refuting at least one cliché: Here, Hitchcock is said to have improvised the creation of imagery, shaping certain pictorial counterpoints on the fly, rather than remaining chained to storyboards. And this material is ably complemented by “Writing with the Camera,” in which filmmaker David Raim further examines Hitchcock’s pre-production process.

David Thompson’s 2009 documentary “Once Upon a Time…Notorious” offers a traditional discussion of the film’s impact that might appeal more to casual viewers, with less of the cinephiliac inside baseball of the newer supplements. Two audio commentaries have also been ported over from prior editions: by Hitchcock scholar Mariane Keane, who tends to tediously narrate the events transpiring on screen, and by film historian Rudy Behlmer, who fascinatingly dissects the politics, those of Washington as well as of Hollywood, that govern classical American filmmaking of yesteryear. Multiple trailers, an archival newsreel, a radio program, and an essay by critic Angelica Jade Bastién round out the package.

Notorious, a pivotal film in Alfred Hitchcock’s development as a master of romantic isolation, has been updated by the Criterion Collection with a collection of perceptive new supplements and a gorgeous and lively transfer.

Blu-ray Review: Luciano Ercoli’s The Forbidden Photos of a Lady Above Suspicion